Talk about the development of the emulator and related services.
Check out new and upcoming features to be implemented onto the server.

Forum rules
Before posting on this forum, be sure to read the Terms of Use
Post Reply
131 posts

How about PQ rewards too? They are more reliable source
World drop could be absolute pain to find and not many people put it on AH

Also T3 PQs don't seem to have any blue/purple gear rewards in them, only set pieces and generic crafting stuff

I’m thrilled the leveling sets got ungraded.
Not so thrilled my beautiful Zealot Dominator set got replaced. I feel something I wanted badly and strived to earn was just taken away and I have no way to replace it.
Top

Tier 4 Dwarf RvR Influence for Warrior Priest has the appearance of Sovereign boots (can be worn with level 31).
Not only the icon, but the boots are Sovereign skin.

Pretty sure it's the same for other classes too! 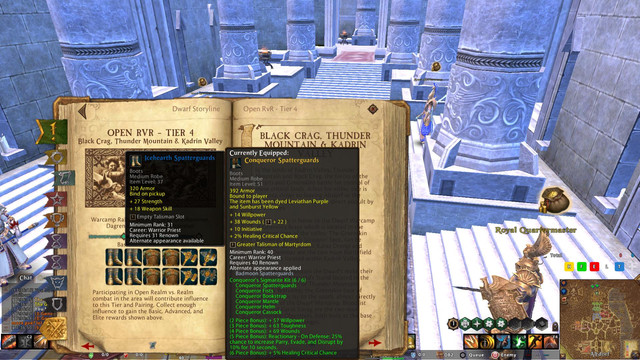 I like the change, the Warrior Priest Vanquisher Chest and the Ruin shoulders are pieces that I never saw and that have a great new skin!
knacks rr76 dps am hey thats me! :=)
*if you bring the stream, i bring the sniper*

Was it intended that the non-ranked sets be changed? My Dominator-clad Zealot also looks like an invader.
I also noticed the icons for the Sentinel set have been changed to reflect a significant downgrade in appearance. (I don't have the set so I cant confirm.)
Can somebody tell us what happened?
Top

Was it intended that the non-ranked sets be changed? My Dominator-clad Zealot also looks like an invader.
I also noticed the icons for the Sentinel set have been changed to reflect a significant downgrade in appearance. (I don't have the set so I cant confirm.)
Can somebody tell us what happened?

My apologies, i was lazy and didn't read. Happy to hear they will be added next patch.
Top

Was it intended that the non-ranked sets be changed? My Dominator-clad Zealot also looks like an invader.
I also noticed the icons for the Sentinel set have been changed to reflect a significant downgrade in appearance. (I don't have the set so I cant confirm.)
Can somebody tell us what happened?

You should read patchnote , and check the gear guide page 1 to see how set looks like noW

Well for what my feedback is worth, I'm disappointed. The set which was the entire reason I play and love my class above the others, and which I was one piece away from completing, has now been placed decidedly out of my reach. And incentive to play pve is now gone. I'm probably in the minority with this opinion though. You guys probably assumed there would be some discontent over the changes.

On the complement side, the other classes look much improved.
Top
Ads

Somehow now you cant dye IB warlord chest tho just recently it was possible.
IB alt sov shoulders are not dyeable (yet again, just as there were as former invader/overlord/imperator).

Do you encounter somekind of a huge problem to fix it or is it just general lack of your time btw? I mean BO/IB invader/overlord/imperator shoulders have been undyeable for like eternity already (since day 1 to be more accurate

)
Another question - is it possible to fix super clunky animation of IB's sov/alt sov/warlord cloaks? Upper left part of cloak getting inside your character while you run and any action taken by character makes cloak bug out much.

As a huge Dwarfs aesthetics fan i give eye-teeth for more winged helms options. Current onslaughter as was mentioned before is not the one on Guide screenshot (that look was on bloodlord previously) and beastlord are the only options we have. As onslaughter/bloodlord is very clunky with that rim on nape and very ugly face crescent.
Hammerer havent made its way into live, so i see no biggie in using those assests. Why should they be wasted anyway?
I would really love to see them appear on some random (hard to get) items, like chapter's influence or unique quest rewards.
Last edited by nocturnalguest on Thu Apr 30, 2020 7:08 pm, edited 1 time in total.
Top