In this section, you will find some advices and basics to start quietly ingame. Question like " I'm lvl 1, what shall i do?", "What class shall i pick?", will find some answers in this place. 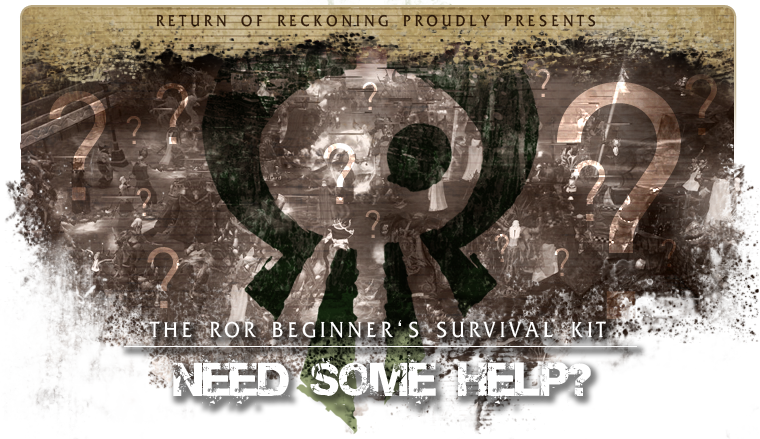 Hello newcomer! Welcome to Return of Reckoning.
Your first step may be a bit worrying and the first difficulty can appear soon enough if you’ve never played this game before.
On this post, we are going to give you some information about leveling and the ways to level quickly, and other difficulties you may experience.

Yep. In this game, there are 2 differents lvl bars for each characters.
The XP level ungrades your stats and unlock class’s abilities. It goes from 1 to 40.
The Renown Rank (RR) unlocks other points you may choose to purchase to gain more stats or some cool features. This rank is getting increased ONLY through doing PvP or RealmVRealm (scenarios / Open RvR). It goes from 1 to 80 giving you points every new level, but you can continue to progress for cosmetic purpose up to 250+. The Renown Rank is considered as the real level of your character. Your RR can't exceed your XP rank more than x2 (if you are lvl 1XP you can be only RR2 but not RR3, the only exception, is when you are a lvl 40XP.)

B. Ok. How can I increase these ranks?
You can gain XP almost everywhere, doing almost anything. Killing mobs in PvE, discovering new zones, making quests, fighting against other players in scenarios or Open RvR. Depending what you are looking for, options are numerous, and each of them has advantages and draws. To increase your renown rank, you will have to fight other players, in Scenarios or Open RvR.

a. Killing mobs. Probably not the most interesting way to progress, but probably the best way to gain a lot of money or crafting ingredients. Find mobs of your level and go get ‘em. The only problem is it can become boring after few minutes...

b. Doing quests. Actually, XP gain from making a quest is x2 compared to the original WAR server. This includes all quests ( PvE, Sc, RvR, Dungeons...), and all zones, whatever your race and faction. Some quests like "speak to...." are very easy and fast to do and give a lot of XP compared to the effort done. Some may be harder, and some have the same or almost the same objectives and can be stacked to optimise your leveling. Since RoR is still on the alpha stage, some quest rewards (objects) are not really interesting and could be considered as a junk. We will probably work on it later when we will find a time to.

c. Doing scenarios. Doing scenarios is a very good way to gain XP (and renown). Depending on the timezone and tier (1-15; 16-39, 40+) it pops quite often. XP gain is pretty decent in case of victory (and not so bad in case of defeat if you tried hard enough), also there are social SC quests which are not that bad too (remember they are x2). Of course, you can make scenarios in the same time you are doing PvE.

d. Doing Open RvR. It’s definitely not the fastest way to level your XP, but depending on what you do, it can be pretty good for the Renown rank. It gives you an advantage to play with other players and participate in massive action. You will level your XP more slowly than in any other approach, but you will be able to learn better how your character works versus other players. Keep in mind, this is not a solo game, and sometimes big battles involving hundreds of people happen. Again, being in a warband and taking an advantage of quests can be interesting. When you hit 16, you will be able to join high levels in T2+ RvR lakes (take SoR addon to follow the campaign, or type .rvr to get info). Your character will be bolstered to 48. So don't panic, you won’t be cannon fodder

This is for the general way to level.

C. The tricky parts.
If progressing from 1 to 16 is pretty fast, leveling from 31 to 40 can be a bit longer. When you hit 40, you are not bolstered anymore and yes, it may hurt in SC or ORvR. That’s true. We have to enhance the progression system but dungeons can provide competitive gear while you work on your renown level.

We are looking for better solutions (we are exploring some of them (increasing ToK rewards amount, review of Scenarios, proposing XP scroll like acclaim pots for lvl 31+...), we are also providing some little events giving x2 (XP/RR/Inf) on weekends or even a whole week throughout the year. It usually happens every 2 months.

D. Some little advices.
- When you are going to log off, park your character in your capital city (Altdorf for Order or Inevitable City for Destruction). Your character will rest faster and you will have an experience boost for your next session (your exp bar will look a bit different), the bonus you get is proportional to the resting period within one and a half times of your current level.

-Take profit of Acclaim pots you can buy those with Paragon and Exemplar currency in your capital (Earned from T2/T3 open world PvP). It will give you +25% RR gain buff for 72 hours (in RvR or Scs). This bonus is stackable with other sources of bonuses.

-If you are in a guild, use guild banners with adequate tactics. Again, you can gain +10% Xp or Renown or Influence. This bonus is stackable with other sources of bonuses.

-If you play with guildies in Open RvR; claim keeps (+10% bonus) or progress in a current campaign (leader/officer has to type .guildinvolve when in the lake) (+5% bonus). It doesn't cost a lot of money to your guild but it is useful for lowbies. This bonus is stackable with other sources of bonuses.

You will always feel like it is too slow

. But keep in mind this is a MMO. It is designed for significant investment of time. Enjoy the world as you progress!

We wish you luck on the battlefield!

ANY PROBLEM WITH STARTING THE GAME? CLICK HERE
Top
Ads

Thank you very much for making this, really helpful!
Top

Thats extremely good guide for such newbie as I, thanks a lot sir! Im also big fan of casino, so when i want to earn some money online at casino i go to Neosurf casinot - there i read lots of reviews and choose where i will play online games for cash
Top

Thanks a bunch for the "little advices", just started playing with some friends and levelling has started to slow a bit and I had no clue about all these great tips.

Thank you so so much!
Top