Forum rules
Before posting on this forum, be sure to read the Terms of Use
Post Reply
44 posts


Or you know, even the healers and DPS should just be tanky and have like 8k hp+ and just detaunt and don't break. Have aggro meter so you can detaunt ahead of time and out-heal/not get bursted.

I'm just saying the right 1st boss is still harder than Skull Lord still even though Ulfr gets easy after everybody gets 8k hp and react to aggro meter.

i just want to add 1 thing as feedback:

Could you add a NPC where we can sell trash? My inv is full after 1 wing ...

The rest was fine beside the fact that we just killed the left wing boss as the server crashed yesterday. (we killed but didnt loot yet) As a result we did not get the kill credit for quests and had different lockouts in the grp. (3 of us with no lockout, 3 with lockout on left minibosses) then we decided to proceed with mid wing. After first mini boss my lockouts changed to only lockout on mid minibosses.
(if you want to see the different lockouts i screenshoted them)

Lord Slaurith can auto attack for 5k without detaunt, and if you're unlucky with the pulse spawning on top of you, he can actually kill you instantly at 9k HP if he crits. Having high HP and armor makes him insanely easy, but without high hp and armor, he is obnoxiously hard.

DO NOT clump up, it is better that he silences 1 person than 2 people. Fight him normally where everybody spreads out, and healers stand in blue circle while building tanky, it is the best way to beat him.

Pro tip: if you tab right before Slaurith changes aggro (Around the same time you detaunt him, like every 20 seconds), you can check if the bloodpulse is there or no. First time it spawns, the bloodpulse will not activate for like 2-3 seconds and you can see this by actually CHECKING with TAB TARGET. This is important because it allows you to react to the bloodpulse ahead of time.


This fight is a PERFECT example of "this is not a DPS race" and EVERYBODY including the DPS and Healer build tanky so you can one shot Right Wing last boss all day [or every 4 days]. Because if you're constantly wiping due to the the healer is dying to random 5k crit cleaves, then that's just not helpful at all and is actually slower than if you just built survivable.

Assuming you don't know where the bloodpulse will spawn:

Healer - Build 9k+ HP, use armor pot, PERMA DETAUNT THE BOSS, l2manage resources, GROUP HEAL while moving away from pulse + silence = win. You don't have 9k hp? You're just depending on luck, really stupid that you think the tank can run into the bloodpulse IN time when you die in 2 seconds flat with that fail low HP build; having low hp here means your tank can't take aggro off of you in time, not hard to understand this concept; if the healer can tank the pulse + Slaurith, the tank will have time to react and take aggro away from you.

Renowns - Max Wounds (Top priority and is really cheap too) > Heal CRIT, but if you want to go Willpower after wounds go for it.
Talismans - Wounds are cheaper than Armor, if you can afford high level Armor, go for it.
Buff potions - Below 9k hp = any Wound liniments (even the garbage ones), Above 9k HP w/e you want.


USE FOCUSED MIND M2 when you are silenced in an emergency. DO NOT use anything else, the tank has to be alive or Slaurith will kill the whole party.

DPS - Same as healer, build 9k hp, use armor pot, detaunt every 20-30 seconds, don't break, if you are melee GET OUT of the bloodpulse and start attacking once the aggro stabilizes. Don't die in 2 hits or you're just throwing an easy (but obnoxious) boss. But START ATTACKING once you see him do that shout silence animation, because 100% he won't chase anybody else.

Renowns - Max Wounds (Top priority) > Damage (Doesn't matter if it is Crit or STR/Int/Ballistic/Weapon skill)
Talismans - Wounds are cheaper than Armor, if you can afford high level Armor, go for it.
Buff potions - Below 9k hp = any Wound liniments (even the garbage ones), Above 9k HP w/e you want.

Tank - Build max parry/max block, armor/wounds talismans, run into the bloodpulse, taunt/challenge the boss just to be safe. Don't die in 2 hits. Pray that your Healers and DPS don't die in 2 seconds and that you have enough time to get into bloodpulse.

Don't believe me? Here are my credentials and I pugged too LMAO: 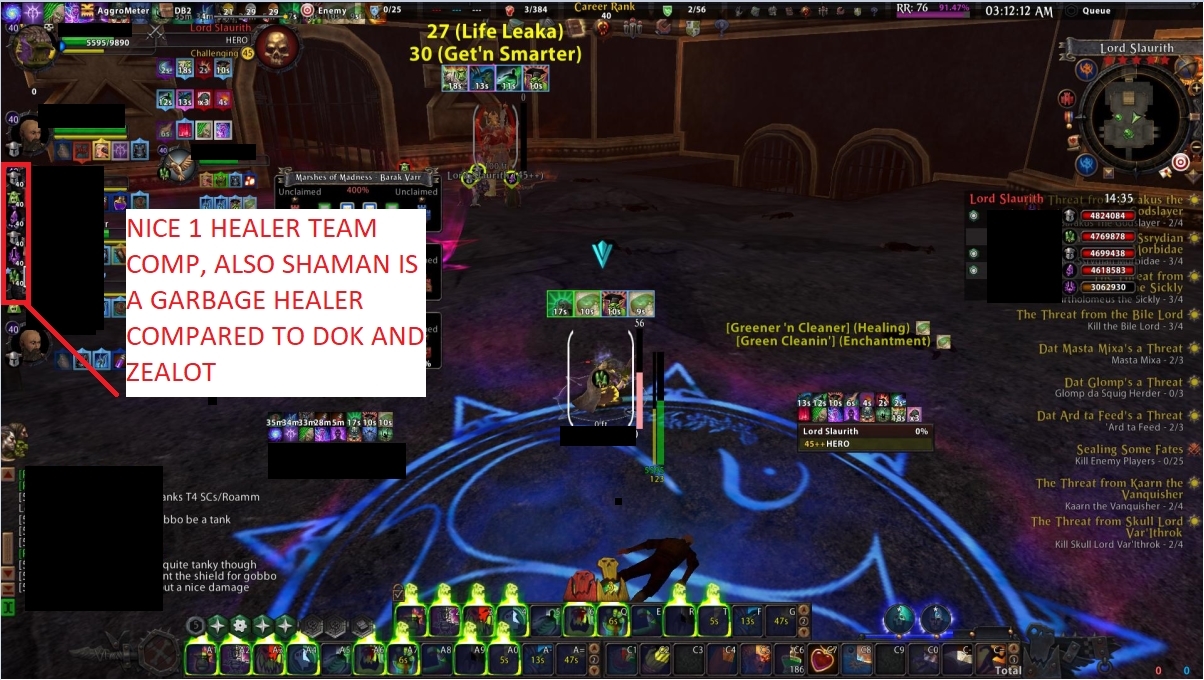 Yes I tanked hits AS A HEALER FROM LORD SLAURITH, not just the 4 tanks on this party. Yes it was technically 4 v 1 towards the end (and it could have been from the start too). Really EZ boss just don't build dumb.

This guy is easy, just stop dying in 2 hits (Including DPS and Healers)