Forum rules
Before posting on this forum, be sure to read the Terms of Use
Post Reply
57 posts

dether wrote: ↑
Thu Feb 27, 2020 4:26 pm
The problem with masteries is that for some builds bring something op but for others totally nothing.
Its not a bad idea no one said that but having to farm this set for a year as a casual and get nothing from those 2 points compared to some other class it may feel bad .
Its a class design issue atm more than a set design if some classes it would be nice if all classes had more options like those you mention so its a cool design but not fair i think

Yup, like +10 renown points to spend instead mastery would benefit EVERY CLASS AND SPEC and prevent unintentional OP builds.

Right now the specs can be balanced around certain amaunt of mastery points and ppl have to choose between goodies. With +2 mastery on my choppa i could get both: healdebuff and selfheal from left tree and GTDC + chop fasta from the right one. And you cant balance thing around it, unless you start pushing skills to m4s places in trees, which would make anything but sov meh. On the other hand my DoK got everything (mastery wise) on like rr40 so it would be just another 2 useleess points for him.
DoK RR80+, Chosen RR80+, Choppa RR70+, WP RR65+
Top
Ads

Hello
as for BG 8th piece bonuses which were implemented in patch 22.02 hotfix 4 I understand that those mentioned in armory are the ones implemented.
WL Unnerving Hate
SOVs Slowing Radiance. All three are slow, WL single target, SOV aoe - according to some old website. Since BG has already 2 slows both single target and aoe, its a bit misguided bonuses. Invader crit reduction was very nice addon to utility of snb, maybe something similar on def sov? WL set seems armor piercing/anguish oriented, maybe another cleanse? some few second of slow immune? as for Dark Champion set, slight movement speed buff/trigger?
Next stop? The frontline ...
Tiamath - RR83 Blackguard, Khaladh of Kar Khadath Regiment.
Top

The only feedback I feel entitled to give would be regarding the Dok/WP sets. The healing set in particular. The 4th bonus states that the DoK/WP will receive 15% more critical damage. This isn't a bonus at all. I'm unsure if this was just miss-typed or if it was intended to weaken Dok/WP heals.
Top

I like a lot about the tank offensive sov. That said, I'll boil down my suggestions to a few to keep it simple. In no particular order:

Beyond this I have no strong feelings towards any of the other suggestions.

Thanks again for the hard work.
84 BG
4x IB
Top

You're kind of a **** when you talk about what failures devs are.
And how sad and disappointed you are. It's pretty easy to ignore you because of it. I wouldn't expect that attitude to result in any of your desires being fulfilled outside of total coincidence.

Please don't ignore the request to improve Offensive Sov for tanks just because of one person being a ****.

Don't punish the tank community because of one person.

jhwieser wrote: ↑
Thu Mar 12, 2020 3:33 pm
I like a lot about the tank offensive sov. That said, I'll boil down my suggestions to a few to keep it simple. In no particular order:

Beyond this I have no strong feelings towards any of the other suggestions.

Thanks again for the hard work.

You're kind of a **** when you talk about what failures devs are.
And how sad and disappointed you are. It's pretty easy to ignore you because of it. I wouldn't expect that attitude to result in any of your desires being fulfilled outside of total coincidence.

Please don't ignore the request to improve Offensive Sov for tanks just because of one person being a ****.

Don't punish the tank community because of one person.

Agree. As much as I want you to do exactly the opposite of this guys request, please ignore him and do what you think is best.
84 BG
4x IB
Top

Hello everyone my english isn't very good so please excuse my language,

from my current perspective, having played all healers on both sides for years now and having DOK,Zealot,WP 80+ and with full Invader- AM (soon full SOV) some thoughts:
The new set seems to me contributing even more to the imbalance between the classarchetypes DOK/WP vs AM/RP/Sham/Zeal.

Some thoughts:
WP/DOK already have double the amount of the armor a robe wearing healer has (AM/RP/Sham/Zeal have the same set pieces on SOV)

has
- this taken into account its hard for me to understand, why WP/DOK, as a high armored class, get -15% Critdamage reduction (this is an insane universal bonus vs all DPS classes and especially VS SORC/BW which are easly cleansed with DOK/WP and rely heavily on +critdamage)
-while low armored healers AM/Sham and RP/Zeal get +6% reduced armor penetration (which counters only weapon based classes and is practically of no use for low armor - most weapon based classes that could really be a potential threat do have tools that either bypass armor completely or to a certain amount that is x times higher than 6%) - Please give AM/RP/Sham/Zeal the the Critdamage reduction and the reduced armor penetration to WP/DOK as they are designed to have the higher armor and thus tougher vs weapon dmg. .

DOK and WP already have insane sustain as healers if played defensively and can maintain their class mechanic to a point where they do not even have to get into a danger zone to use attacks to generate it. The idea of giving DOK and WP higher armor was to give them the possibility to maintain their class mechanic with meleeattacks - i really believe that this idea got lost in RoR and everyone accepts the fact that there is a healer class with double armor, which can potentially soloheal a party, doesn't neccesarily have to go into any meleecombat range and can kite well, because of having either instant hots or max 1 sec castimes. The above said - I really don't see a single justified reason why the 7 pieces bonus is a class mechanic generating proc on WP/DOK. Please either nerf it to the state the Vanq set has (15/3) sec or remove it completely. 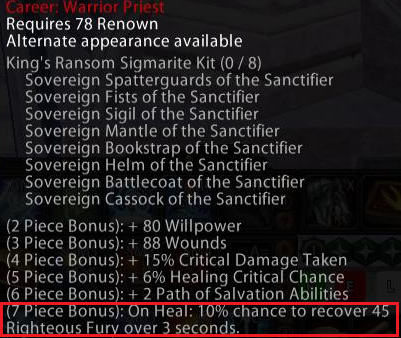 Another rather hidden problem with these on hit procs seem to be this (I will try to explain sorry for my bad english): If you use partyheals and you are healing a party of 6 man - these procs seem to occur insanely often but why? - maybe because the "oh heal" check is made invidually for every target that is healed or is generally buggy (An experiment that proves this: pick khaines refreshment (DOK) or martyrs blessing (WP) slot the subjugator weapon (with the AidX ondirectheal proc) go into a rvr zone and stay in a very crowded spot surrounded by allies - pick a far defensive target 200 -250 ft and use the khaines refreshment/martyrs blessing - you will see that nearly on every healing pulse your defensive target will recieve the AidX proc - even though your defensive target is not even in your healpulse range. The above said - the actual strenght of AM/RP/Zeal/Shaman are actually the singletarget spells and all these classes have partially very high casttimes for partyheals and in purposes such as cityraids these classes have to deal heavily with casttime setbacks or are even forced to kite and can rarely use a partyheal so can't actually make use of procs as efficiently as a WP/DOK with short or instant partyhealing spells.

Generally - for the squishy healer archtype AM/Sham an AP proc is by far not worth the loss of 730 HP (with Invader/SOV combo) where as your main gameplay strategy is to drain AP from targets with low disrupt rate, surviving through kiting and try to keep up your group with hots. Here especially i feel like the AM gets the worst contribution from the SOV Set because you have - concerning the gameplay strategy - no speedproc tactics like the Shaman has for kiting and you are way more stationary than the Shaman (with the given stationary spells like funnel essence) - so naturally you do need more HP to survive in difficult situations. If the DOK/WP keep the the class-mechanic proc - i would really suggest to modify AM and Shaman (please take here into account that the current state Shaman vs AM is not equal) sets accordingly as these classes should be given an equally good proc the class can really make use of - for example a casttime reducing proc.
Top
Ads

Zealot feedback: I picked the DPS (alt) over the heal (main) set simply because up to 6pc is also really good for healers. +2 to group heal tree is nice and a reduced chance to be disrupted means I can get important life-saving staggers and punts off with more reliability.

I second the 4pc bonus for the Zealot heal (main) set being a bit lacklusture. Zealots don't stack armour naturally and it requires you to use a lot of very expensive talismans to get anything out of (and stacking armour over wounds leaves you vulnerable to magic and morale), otherwise you're still going to be debuffed and penetrated (or just bypassed completely) by MDPS.

Besides that, 7/8 pieces of the Zealot's DPS (alt) sovereign set still has healing stats on it (bug is on the tracker) but Harbinger of Doom converts these. I'm worried that the stats might be changed to something else entirely rather than just being swapped from willpower to intel when fixed meaning the 5pc (soon to be 6pc) investment might not be as good as hoped.
Zomega: RR8x Zealot
Addons: CityFix v1.0
Top