Forum rules
Before posting on this forum, be sure to read the Terms of Use
Post Reply
19 posts

RoR has a big advantage over other RvR/largescale pvp mmos on the market. The Realm Vs Realm and the keep sieges.
Some of us might remember our first keep-siege either on Age of Reckoning or here on RoR. A sea of red names beneath your castle walls, every tower and battlement manned, collision, effects projectiles, a frontline of shields and whatever else made this moment feel epic where other games dont stand a chance.

Those moments are what attract a big portion of players when they see gameplay videos, when we want to attract the largescale pvp audience.
But unfortuneatly attacking a keep on RoR is not as epic or fun and the firsttime epic feeling quickly fades and gets replaced with boredom or annoyance over how simple and limmited besieging is.

There has been mentioned about Siegetowers before. And if the Devs have the tools, I truely feel this could spice up both the besieging fun, defence and zonelocking.
There are a few models already in the game. The one we almost all have walked up, is in the scenario "Gates of Ekrund". A simple ramp leading up to a wall and vola we are up in wall-hight.
A few other siegetower models i have found in the game were mostly around pve warcamps and questhubs:
https://imgur.com/a/RR1z9Re
https://imgur.com/a/ss4ril6

IF these models, or even new models could be implimented it would be fantastic!
Instead of four players out of a massive battlehost are responsable for ramming down the gate. And everyone else is basicly just protecting the ram from defenders jumping it, we could have this extra layer of attention to breach and spread the focus out over all of the walls.
Siegetowers being slow moving structures built by resources in a "siegecamp" where supply runners can drop resources to build a tower, and afterwards players push the slow moving tower up towards the walls would direct and attract alot of the defenders attention and fire. If these models had massive health and required to be focus fired down before they reach the wall it could create breathing room for MPDS trying to bypass posterns, tanks ramming and whatever else is ongoing during a siege.

Basicly a siegetower option would openup for one more entrypoint so everything is not just a single chockpoint, with no line of sight to your healers(postern pushes). Along side of an option to distract, and presure the defenders at the wall. Who can defend and repell the siegetower if they focus it fast enough.

I dont really care too much about how it would be implimented, i just really feel like orvr and besieging needs an improvement. Now more than ever when we see stalemates, 5star locks and turle for door-repair bags.

Brilliant idea! I would love to see siege towers, that would open up a whole new world of pvp!

It could make attacking five star keep worthwhile: with added entry point for outer wall whole operation could be fast enough to prevent zone lock, or

It would warrant supply management rework - accumulated resources would have to be spent when deploying each and every siege weapon: oil, cannons, rams and yes, siege tower. More thought would have to go behind choosing best setup for each zone (cannon range, terrain to navigate siege tower through, keep design and so on) and it would put some common goal behind resource runs other than 2-4 star race and 5 star race in case of stalemate.

A thought of having prison-like lever operating outer gates (that ram has to pass through them when inner is controlled by besiegers) and infiltration / spy hunting game it would bring to life.. Joy joy joy

Assets for siege towers are already in game since every race has one somewhere in the world, just make those wheels rotate (and maybe put in requirement for full party to "push it" at walk speed? Escorting such a high value target through pvp zones would make it a high stakes game indeed!

Once again: I love this idea! 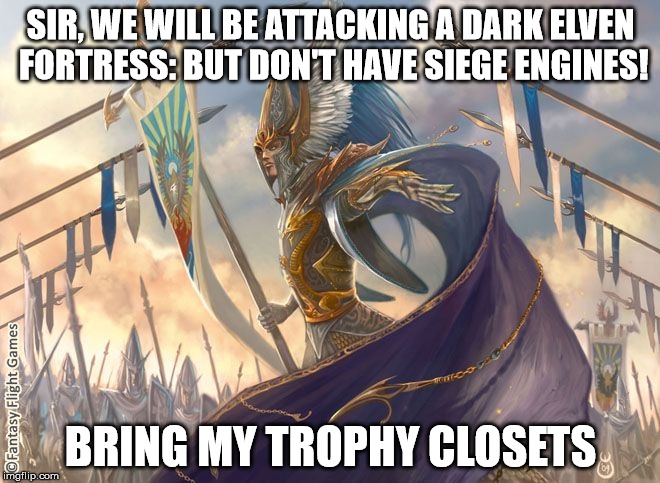 the very moment a premade warband steps foot inside the courtyard of the keep is when all the defenders will have to abandon their only second layer of defense. defenders cant even handle a party or 12 man of WH or WEs when they take control of the oil room.
Chosen: Roten Plaguelord rr85 | Knight of the Blazing Sun: Lyntyz Jesterknight rr63 | Warrior Priest: Ulfrric Greywolf rr51
Top

space44 wrote: ↑
Thu Feb 04, 2021 5:34 pm
the very moment a premade warband steps foot inside the courtyard of the keep is when all the defenders will have to abandon their only second layer of defense. defenders cant even handle a party or 12 man of WH or WEs when they take control of the oil room.

Shooting the siegetower down, or jumping from the wall to stop it will be an answer if the defenders feel like they cant handle the walls being breached. Naturally giving the siege more layers instead of a single focus of the ram + oil area.

let me try to paint the picture.
Destro besieing the order south keep in praag. One organized warband spearheading the siege from destro, they manage to get a siegetower and it has been spotted while the ramming is ongoing.
Order then have the option to
a) ignore the siegetower and use the chance of the destro premade warband focused on pushing and protecting the tower, to attempt to kill the ram
b) move all firepower from the battlements from the oil area and side walls to the area where the siegetower is headed to try and funnel the spot(exposing their maingate and posterns)
c) try to handle all tasks at the same time of covering postern groups, siegetower, oil+ram situation.

Siegetowers in this idea should have a healthpool that would require alot of focus fire to break the actual towers, the towers need to be moved at a really slow speed so defenders have time to feel the presure as the tower approaches and react to the landing spot.

But as of right now, we see pretty onedimensional besieging of keeps. Rush 2 stars, let go of all BO control in the zone, everyone rally and escord the ram + singletarget canons. 4 tanks start ramming, kill the oil every 3 minuts and continue ramming.
I think siegetowers would offer more layers, to break strong funnel situations and give the attackers a needed incensive to make a move, as funnels are defensive bags are too appealing as of right now.
Bombling RR 91
Alts:
Brightwizard SH[BiS] Powerhouse Zealot [vanq] Chopling Choppa[invader] Notbombling Sorc [38twink]
Bombthebuilder Engi[invader/royal]Orderling WP[onslaught] TheBombMan Knight [invader] Bombing SL [invader]
Top

I would love to see this happen. But also give defenders tools to bring down the tower. Something like canons shooting harpoons, and then pull ropes to pull down the tower? And the tower falling should damage people inside and underneath the falling tower

In film there are two really great sieges first is Helms Deep and the other is the Kingdom of Heaven. Before putting in siege towers as I think the issue is there is no order skin for it but two for destro, dev's could implement ladders. Now the issue very easily could be that players just put up loads of them on both inner and outer wall and then it's game over. So to balance this I would insist ladders could be knocked down and you take some serious damage falling. If the doors are not down the lord is stronger, like a lot stronger so it would require co-ordination so using ladders to take the walls and then ramming the door in. Next only one person at a time can safely climb a ladder so they would need to be deployed in force and tactically to stretch defenders but also need players to defend the ladder, this means hopefully a lot of action between wall and postern no one can simply stay at range players have to move around the keep to defend like in Helms Deep in the book. Ladders take up space so you can just but up 20 in one area and a whole warband scale the wall, again needs to be co-ordination between players. Have I missed anything?
Top
Ads

My next thoughts are that how the cannons fire needs to change and be brought in line with tabletop. My first suggestion is that the empire and dwarf cannons require a team of three similar to how the ram has a team of four. One player adjusts the range of the cannon and fires, the next player cleans and the third player reloads. How the cannon fires from the point on the ground that a player has adjusted the cannon to similar to the helblaster except it is a single line cleaves for 50 feet dealing between 5000 and 10000 damage this way it can still hit doors and oil if adjusted and positioned high enough. In addition, the cannon should also fire grapeshot which would be the same as the dwarf engineer's blunderbuss attack but it has a slightly longer range of 60 feet but deals 4000 to 6000 damage. This would require communication between the players to decide which to fire. How the dwarf cannons would differ is that players could purchase runes which would improve the cannon, this is something that could be guild only currency.
Top

It would be nice to have, definitely, but something tells me it would also be a nightmare to implement.

The siege towers that you show in game are static assets, and only for 2 factions, so even those aren't very useful.

So the team would need to:
- implement new, dynamic assets, for siege towers
- create a brand new siege weapon with it's own mechanics
- have it interact properly with the game world and the keep walls
- balance it (if the siege tower is strong and can be placed on inner and outer what's the point of ramming?)
(- manage forum posts complaining about siege tower balance)

This is close to expansion-level features we're talking here. At the same time, RoR still has content that existed on live that's not out yet here (lost vale, lotd).

I don't know how realistic it would be to ask this of the dev team and "pounding our fists on the table" (as some tend to do; not all, ofc) does not help.