The rewards have been sent!

As Season 2 just ended, the rewards have been sent to the respective ranks on each class leaderboard. 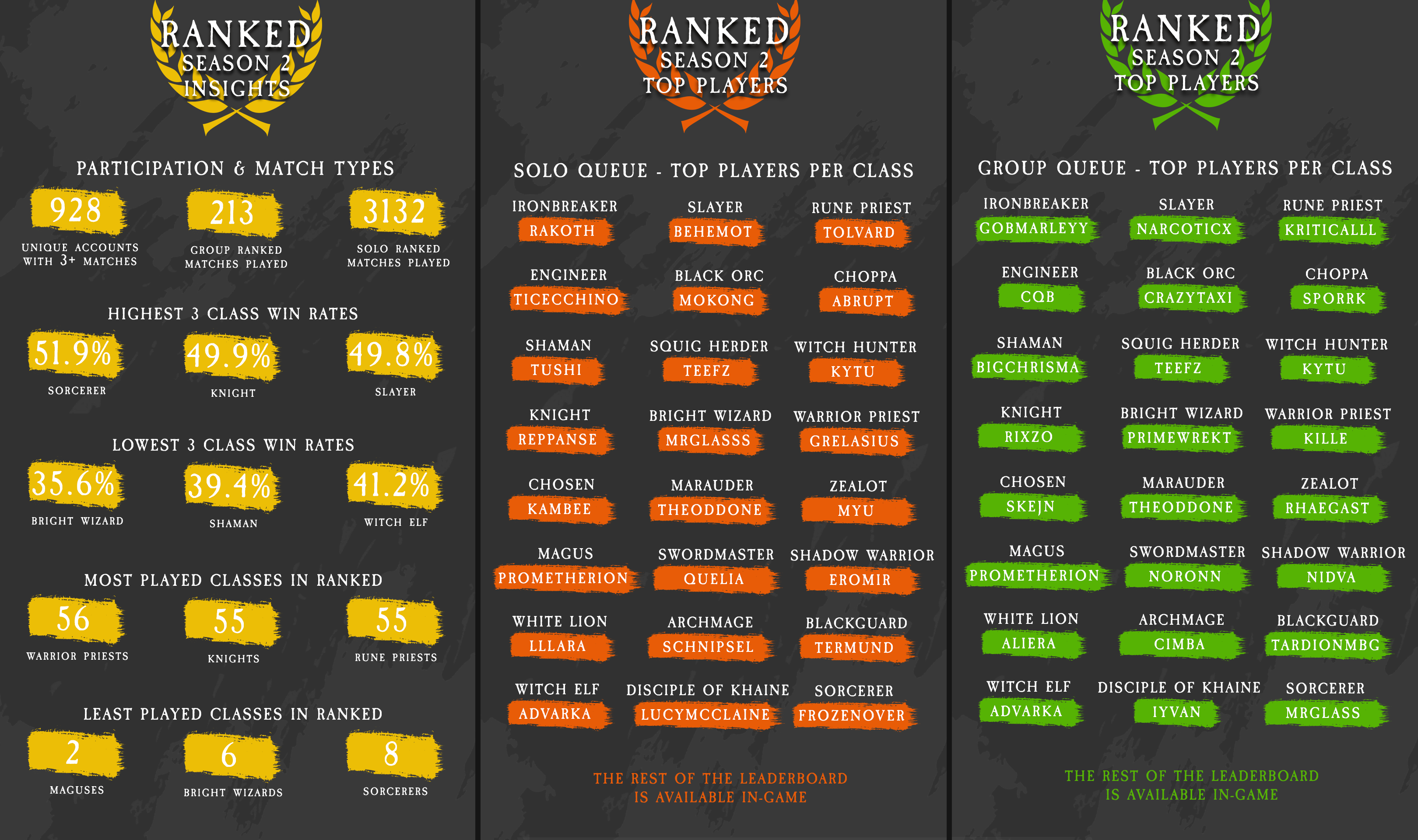 For feedback, suggestions or cooperation with the project, please contact me:
Discord: GamesBond#2976 | Email: [email protected]

I hope you don't take these percentages for balancing. Some WEs did very well in there, yet there overall win rate is low. SW couldn't be playing in range because it was that bad. They were all assault. DPS RPs were not allowed to queue because they were that bad. Order got lots of wins because of slayers. And so forth.
Top

That's what a small sample will do for you, the law of large numbers isn't really there to flatten out trends and outliers will skew the results heavily. Still very interesting though, but I suspect a bunch of people are going to read too much into these stats.
Defraz rr81 Magus
Defrack rr81 Mara
Induce rr77 Shaman
rr7x AM, Choppa, WL, WH, WE
Top

I hope you don't take these percentages for balancing. Some WEs did very well in there, yet there overall win rate is low. SW couldn't be playing in range because it was that bad. They were all assault. DPS RPs were not allowed to queue because they were that bad. Order got lots of wins because of slayers. And so forth.

8 sorcs and 6 BWs - I doubt that's even relevant for balance. We also do not balance the whole game based on ranked, ranked is not and will never be the main game mode of Return of Reckoning.
For feedback, suggestions or cooperation with the project, please contact me:
Discord: GamesBond#2976 | Email: [email protected]

If sorc was the class with more win rate % and one of the least played class, it means Frozenover owned the ranked lol!
Congratz Frozenover! xD
Top

I hope everyone in ranked had fun and we can have a 3rd season without any "pls fix ranked" begging.
SW, Kotbs, IB, Slayer, WP, WL, Mara, SH, BG
Top

Would be nice to see a balancing patch before to shake up things a little. Melee dps dominating in ranked isn't only a ranked thing. They dominate in 1:1, group vs group and wb vs wb. Ranged dps classes just don't have the tools or damage to burn down organized 2/2/2 groups. They just don't have. Stack several 2/2/2 melee groups and you have won the game. It's also the reason they want only maybe one ranged dps for champ in city groups. They are in a pity state. Try rain of fire on an organized group/wb. Try engi or SW aoe. It's dishearting.
Top

Also therefore we wouldn't have to play Solo (Ranked) in a "group-up" incentivised game.

The main challenge I think for Ranked season 3 will be to give players that do not belong to the absolute top a reason to play.

What last season showed is that Ranked needs these players, whether it likes that fact or not.

Ranked is intense and time-consuming. I enjoyed it a lot, yet for me it had two faces. I learned and improved a lot. It is very challenging and rewarding at its best, but also a life-sucking vampire at its worst.

People deserve to be rewarded for engaging in this unforgiving crucible. Right now, I believe the dominant sentiment among the sub-top is that they stand to lose, and not to gain.

Almost a thousand unique accounts attempted several matches of Ranked, yet after only a few weeks nothing was left. The potential for success is there. Many, myself included, believe that an increase in population will alleviate much of the issues that Ranked has. So where did all these players go?

The most obvious answer lies in the decision to gate the Triumphant jewel behind 1000 MMR. As was explained in the past, reaching this MMR was deemed possible for everyone, yet in practice this turned out different, at least in part due to the lack of games being played. The issue is not just that it gave weak players the idea they stood little to gain, but it also gave competitive players the idea they stood much to lose.

For many players, this is the only reward that Ranked offers that has value for them. I know some will argue that they believe the rewards to be sufficient as they are, but the way the season developed has shown the majority of players disagree. That is a given, whether we like it or not.

I'll state it bluntly, if the Triumphant jewel had not been locked behind 1000 MMR, we would have had Solo Ranked matches 24/7. People could afford to simply play, and not have to worry as much about spinning with weak players or into stacked opposition. The MMR system could have done its job to ensure quality control at the highest levels of play.

The price to pay? The jewel would be a little less exclusive. Is that worth it? I'll leave that up to everyone to decide for themselves, but I think my answer is clear.

Lastly, I'd like to note that Ranked gamemodes in whatever game they are present, are just as much about the top as they are about reaching that top. If the latter cannot be made appealing, I fear Ranked will not live.

If people crave content that is only about the winners, why not host a tournament? Ranked is not that. It's a continuous process and it requires an steady influx of aspiring champions to stay healthy.

I did my best to be constructive. Don't take this as anything other than my genuine thoughts about how to improve this game mode. I greatly appreciate the work that was put into this and it was a little heart-breaking to see it die so fast.
"I watched a snail crawl along the edge of a straight razor. That's my dream; that's my nightmare. Crawling, slithering, along the edge of a straight razor... and surviving." - Colonel Walter E. Kurtz
Top
Post Reply
43 posts