Forum rules
Before posting on this forum, be sure to read the Terms of Use
Post Reply
77 posts

Hotfix 30/04/2019
Spoiler:
[Fortresses]
- Found and fixed a few errors from forts.
- Fixed the release location for fell landing cage.
Hotfix 28/04/2019
Spoiler:
[General]
- Stack bug fixed.
- Duel observers should now be immune to damage.
- Loosing a duel should remove all dots instantly and as an additional effect also heal you for 1k instantly to prevent death.
[World]

- The main stage has been cleared of pets. You may now visit them in the Cat Cafe to the east of the main stage.

- Guards and Lords should now walk back if they get lost outside of their intended location.

- Forward Camps have been constructed at each fortress for the attacking realm. These were positioned with an err towards aesthetic design and reasonable camp terrain rather than trying to mirror exact distances to the Fortress entrances. So if you feel some races are further away than others, they certainly are.

Defenders do not receive supporting NPC's as they were clearly all brutally murdered during the advance of the attacking armies. Sad.

- Guards and Lords should now walk back if they get lost outside of their intended location.

- Resourceboxes in T2+ now rewards more XP on return. Up to 1000 from 300.
- Keeps deranks much slower as to match the resource change.

Set all cannons to nearly unkillable to give the defenders a chance in some scs.

Dordena Stormaxe and Gorbaz Tuffchoppa now offer quests which will reward boots and gloves for enough killing of wing sub-bosses should players be unlucky enough not to procure boots and gloves otherwise.

Invader Choppa / Slayer 7pc : Overwhelm will now correctly increase your armor pen by 20% at full rage and not 40%.

Black Orc :
- You Got Nuffin' will now properly scale with willpower.
- Shut Yer Face will work as intended.


Witch Elf :
- Vehement Blades will correctly deal damage to the target when they activate a melee ability

Witch Hunter :
- Burn Armor will correctly deal damage to the target when they activate a melee ability
- Fixed an issue causing snap shot being undefendable

White Lion :
- Fixed a bug causing The White Lion being able to cast Blindside in front of his target. Note that the ability can be activated from sides or rear and is different from choppa Go to da soft spot which can be activated only from rear.

On my Squigherder I now have an ability called Big Claw, I don't know if that was supposed to be in the new patch because I don't see it in the patch notes. Anyway, I tried it but the ability is not working.
Top

Sorry, I meant the pictogram is different than it supposed to be. 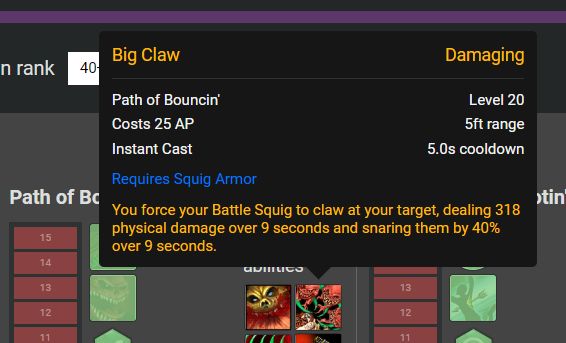 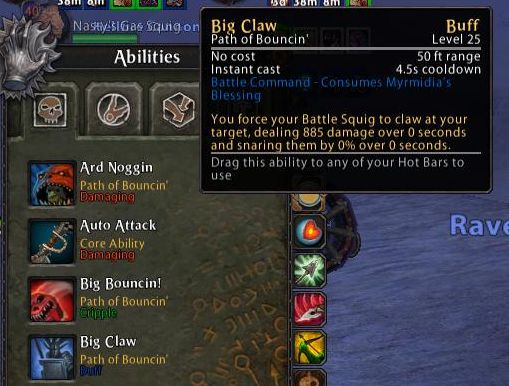 we are aware of an issue with moving stacked items in the patch, its going to get patched soon as the issue has been identified and corrected
Top

nice to see that youz got nuffin-tactic finally can be tweaked, thanks for that, Grunbag! o/
i immedieately went to try it out and was happy to see that there are crit-ticks now as well \o/.
the effect of wp on the hots is pretty minor though, the ticks increased from 101 to 122 with +190wp; -is that the correct value?
if thats the case, the trade doesnt look that appealing to me, but thats just my opinion.
Top

looks like proc weap is self hitting. https://imgur.com/a/5OCIv8P
Top
Ads

Sorry, I meant the pictogram is different than it supposed to be.

Yes, other abilities are all fine.
Top
Post Reply
77 posts