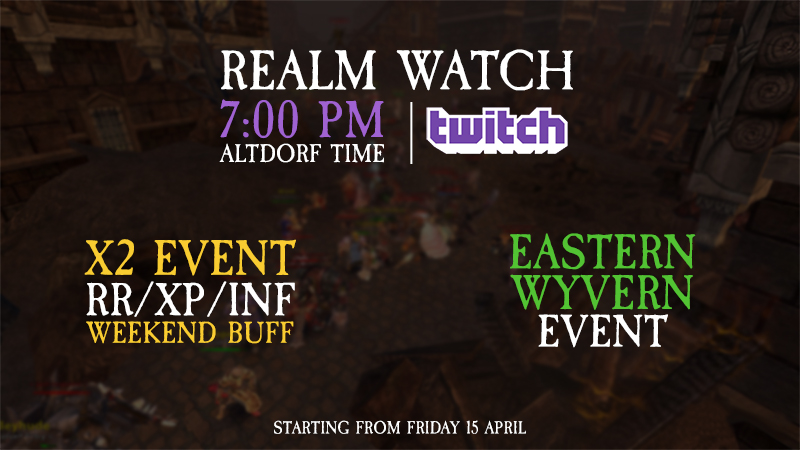 Join us this Friday at 19:00 Altdorf time on RoR Twitch channel to watch the official launch of the 'Realm Watch' series.

The 'Realm Watch' is a new weekly livestream hosted on our official Twitch channel by the community streamer FixxerTV.
It's a community-driven show that offers you a whole new perspective of the RvR lakes, the battles, scenario matches and much more!
This show will also host staff appearances from time to time, in a casual straight-forward discussion with the host and viewers.

This live event will run until the end of Monday April 25th 2022, probably. Look man, it's an invasive species. Just because they largely coincide with when patching is done to "turn them off" or whatever doesn't mean you should take your time for granted. Everything might just end this week for all we know. Make the best of your time, crack some eggs, get out there and explore the world while it's still here.

Increased the amount of War Crests earned per stage in city for a win or loss.

Reason behind this change: The time investment for normal scenarios is about the same as the previous amount (excluding bags), and City is now a time-restricted and time-scheduled event. In order to encourage participation in City Siege content which currently has little incentive, we have majorly boosted the amount of crests given. City is optional content as it stands; there needs to be some incentive to participate/compete. The amount rewarded for a loss, while still significantly lower than a win, is still much more than it was before and is in line with slightly more than losing in a non-scheduled standard scenario for an hour long.

The first reward is now always an item for level 18, the Second reward is for level 27, and the third reward for lvl 37.

Reason behind this change: Players outleveled the influence rewards before they could even earn them.
It wasn't unusual for players to already be 40/60 and they didn't even have full influence in lower Tiers that would only reward them with (useless) low level items.
Hopefully this change will fix this problem.


Does this mean the rewards will be back?
Top

Nice patch, how about the Fix for Fierce might as Secrets said on bugtracker 2 weeks ago it was otw, Hotfix even. ?
Ravezaar Slayer rr86
Ravezz Ironbreker rr82
Goingsolo Shadow Warrior rr81
Zutha Runepriest rr83

340% crit damage is totally normal. Nothing to see here.
Top

You mean this one?
[19893] [Slayer] DOT skills + Fierce Might
Tikii is the name, doing Shaman things poorly is my game
Top


Does this mean the rewards will be back?


Does this mean the rewards will be back?

Oh man, there's gonna be a whole lotta purple fragments and low level purple talismans for sale on the auction houses, then.

Great QoL improvements, as per usual.

Question: recently you implemented a system to have a "queue" of event SCs in place. How difficult would it be to do the same thing for City events?

I imagine at the moment it sets up a random date or timestamp within a range, but you could, for example
- create an array with four elements, all randomised dates/timestamps;
- array[0] is next event;
- when array[0] is activated, delete the entry and push a new entry to the end of the array.

Reason for this is the time windows for cities are a bit all over the place. And knowing only 3 days in advance is not enough for some people; which can affect organised guilds.

Knowing however the schedule for the next 12 days would give guilds ample time to prepare and pick the date that best suits them.

Just an idea, not sure if it will help or not, but if it's not too difficult to do it might be worth a shot.
SW, Kotbs, IB, Slayer, WP, WL, Mara, SH, BG
Top
Post Reply
43 posts