Forum rules
Before posting on this forum, be sure to read the Terms of Use
Post Reply
32 posts

The Dark Elf march through Dragonwake has not gone unchallenged. High Elves and their Order allies have rallied around key locations, determined to protect ancient ruins and dragon nesting sites.

This weekend Bane of Peace will be the weekend warfront from 12:00 on Friday to 12:00 on Monday Altdorf time. You get +50% XP and Renown in the Dragon's Bane scenario, and extra rewards from completing the event tasks.

Completing all tasks rewards the title "Orderbane" for destruction characters or "Destructionbane" for order characters.

- Standards can no longer be placed right up against keep doors.

- New tutorial windows now appear for new characters when progressing through the first few chapters of the game. We will be introducing more of these over time to introduce new players to concepts less prevalent in other games such as Scenarios and Open Realm vs Realm.

Starter guulds is nice and helps newcomers.
What about adding some low pots and white/green low level talismans to shop for newcomers for few silver?
Top

Instead giving away free stuff, include in tutorial screens importance of crafting and make ppl interested in taken care of own supplies.
Top

I'm sorry but these 'tutorials' missed the mark. Fullscreen text or image overlays are not the way to go.

I get that they're reusing old assets or something and they were really easy to implement, but gods, man - they're awful. And worse, they're skippable! No one is going to read these. For the same reason no one is going to read information dalen puts on the wiki - in lieu of actual, contextual actions or indicators ingame for stuff that quite arguably should be visible ingame. So even if you were to make them unskippable, they'd be a nuisance. 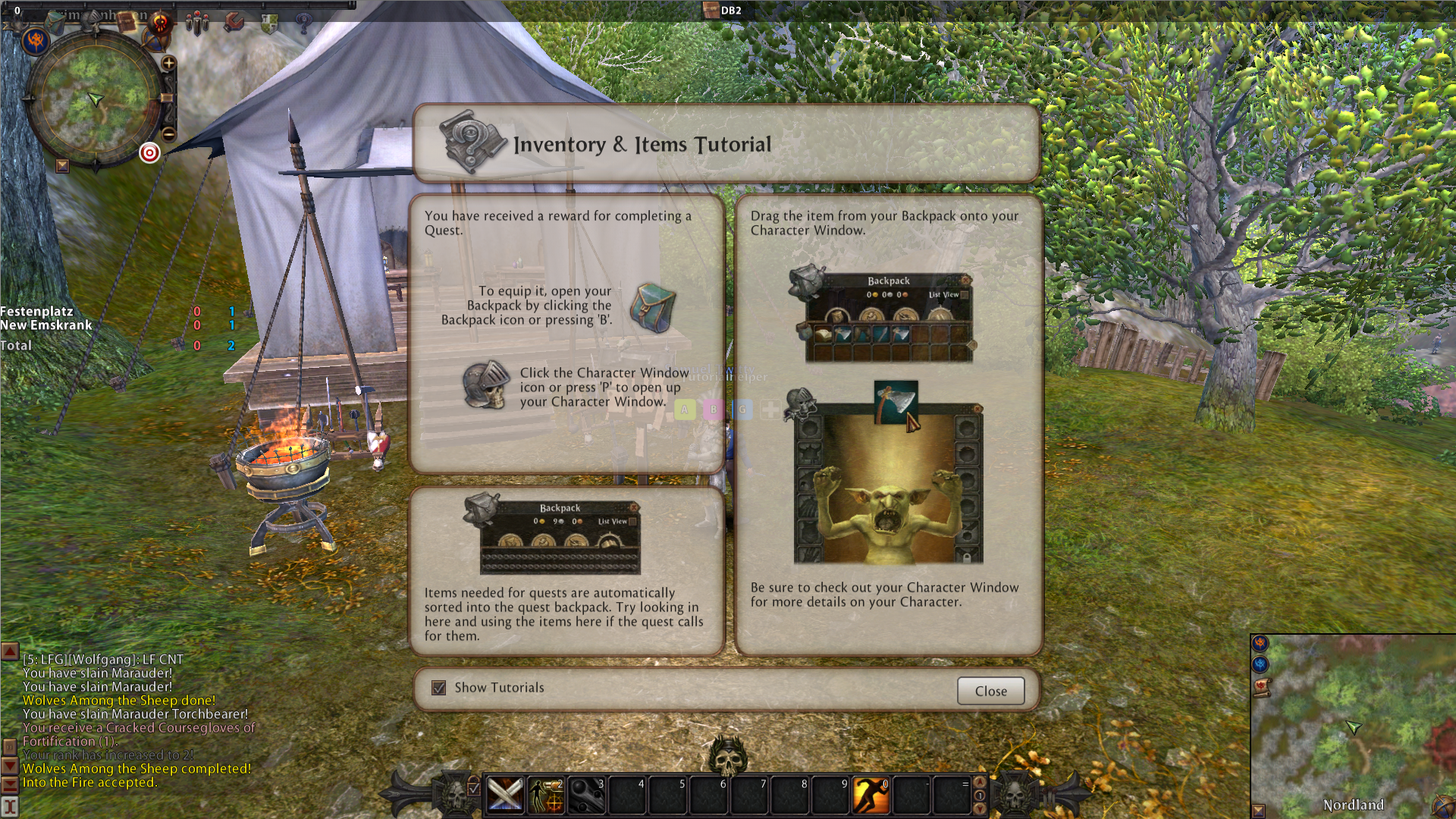 You know what someone is going to do when they see these? They're going to see the full-screen popup and they're going to uncheck the box and never look at them again.

Do not continue this direction with tutorials.
Put in the actual effort to make a contextual hints system that rewards the player for doing actions.
Take for example early games from the PS1/N64 era - they may place a level design in a way that you gradually learn all actions possible. Take that a step further and contextually encourage players to do that, and in an MMO sense, reward them for doing that.

When I imagined QOL, it was not this. This isn't QOL; this is a waste of dev time that will be skipped by new players by using the checkbox that says "Show Tutorials" in the bottom center of the screen because it covers your whole screen and is bloody annoying.

We have plenty control over the UI, hell, even have it channel 9 driven. Don't do fullscreen, skippable tutorials.

Something as simple as introducing an introduction quest that is auto-granted at specific levels, can be abandoned if you don't want to do it, and teaches you the same thing this tutorial is.

Something that says, "Queue for a scenario" and you go to an NPC that teaches you about a scenario, and while at the NPC for the scenario, your next quest objective is to look at the minimap, look for a specific icon (flash it, if you need to), and queue.

Hell, even tell the player that they'll be queued for a scenario in 10 seconds after accepting a dialogue option via one of those popups (The ones for group invites, etc) and they'll be able to see the icon doing something it didn't do before. That will teach them where the scenario queue button is.

Then, give them say, a set number of currency after participating in a scenario and they turn in the quest. Then instruct them to go to a merchant nearby the questgiver to buy some RVR potions. Teach them that they're off of a cooldown compared to standard potions. Introduce them to the concept of AP potions and why they're useful. Have them use an AP pot while at 0 action points to teach them that they can flee and drink liquid courage to continue the fight a little longer.

In short:
"Talk to NPC Name. Read your minimap to find NPC Name. If you need the full map, press M."
That's about the extent of the attention span a new player will have for reading. Everything else should be visual and contextually visual at that.
You will lose them in these crucial moments if you pop up a full screen window with information, as they will simply uncheck the box, thinking they are smarter, and then your whole system is gone.

WAR is not a game about reading. It's a game about performing actions that make you feel as though you are part of their world, and part of the class fantasy. This misses the mark and then some. We're in 2022. We're not in the 2008 Mythic/Bioware era of games anymore.

Some additional viewing from one of Max and I's favorite YouTube guy, Josh Strife Hayes, where he tells you to do the exact opposite of what you've done if you want to attract and retain new players. Highly insightful, link below:

Should also, and I mean this sincerely, mention that Bolster will cause a momentary 'freeze' of the client.

When it first happened to me, I though the game had crashed and had already started to move the mouse 'out of window' to bring up Task Manager.

Um..no. The tutorial absolutely must be skippable.

I absolutely loathe games that force me to do tutorials.

A forced window saying "Hey, if your stuck, we have an ingame help section." - I would see about commandeering the " ? " and replacing it with a fully customized UI (via addon..like; example: RoR_Tutorial)

This forced intro would be sufficient to let players know they have a 'help line'. But allows them to continue learning at their own pace.

This also removes the issue with alts. Most of the 'tutorial triggers' in game are tied to per character. That's how the game is setup. Since RoR has limited control over 'the game'. It may not be possible to create a flag that is flipped for accounts that have already completed a 'forced tutorial' on one character.

WoW's Shadowlands had this issue with the opening quest line for The Maw; every character had to go through it..even if it was your 8th alt. The forums were full of people demanding a skip because they were sick of redoing that quest line.

This would be a huge thing, make the BoP and LVL 20 and below.

Honestly, I'd rather they just made a Talisman Crafter NPC. Kind of like how FF14 has/had a Materia Retrieving NPC, which (I think) charged quite the fee to remove Materia (think WAR's Talismans, but removable). This NPC was there for those who had too low of crafting skill to remove the materia themselves.

So. Assuming it's possible. I would put a NPC in that would trigger the Talisman UI, and require the player to craft low grade talismans (like +1 stat only and maybe +5 resistance stat; max).

The goal is to not invalidate the Talisman Craft, while also giving new players a taste of the system.
Last edited by illutian on Thu Jul 07, 2022 4:50 pm, edited 1 time in total.
Top

Um..no. The tutorial absolutely must be skippable.

I absolutely loathe games that force me to do tutorials.

You clearly did not read my post. Please reread it again. Do not twist my words.

My point is that the information presented is too long and wordy, and therefore will be skipped.
Nowhere in my post did I say that you should have an unskippable tutorial.

For clarity, Disabling skip is not a fix for this lengthy, wordy, text/image based tutorial.

Having an optional, autogranted quest that you can choose not to do, which is granted at specific levels, teaches players how to do specific actions, and is lore-friendly and contextual to the game world is what I was proposing, not an unskippable tutorial.

The quest I am proposing would grant contextually relevant information and rewards relevant to the section in question.
Forcing players to do a tutorial is one of the worst things you can do to a player.


illutian wrote: ↑
Thu Jul 07, 2022 4:32 pm
So. Assuming it's possible. I would put a NPC in that would trigger the Talisman UI, and require the player to craft low grade talismans (like +1 stat only and maybe +5 resistance stat; max).

The goal is to not invalidate the Talisman Craft, while also giving new players a taste of the system.


So this is kind of the idea RoR needs to do.
Autogrant a quest that has you seek out a talisman maker or apothecary NPC.

Teach them how the trade works. The quest should provide a limited amount of materials that can't advance your skill that make very basic talismans.
Quest is completed when you've made 5 of these talismans.

The quest should also show you how multipliers or curios/higher fragments work, and encourage you to take a trade relevant to the trade you've taken.

At the end of the quest, you should be rewarded with a nominal amount of materials to practice your trade with, and a one-off blue talisman.

This encourages the player to at least try.

When I worked on Hawken for consoles, we had 43% of people quit in the tutorial because they couldn't navigate down to the 'deploy' button and select it.
There was no indicator that told them what 'deploy' did - instead, we lost 43% of players in that single moment. We had analytics in place that would inform us as to when those events would occur.

As part of a retention effort, we spawned players in automatically to their first match so they would get the first time user hints that appeared after that point. Our dropoff in the tutorial dropped in half, to about 21.5%.

Beyond that, we had implemented a contextual hint system in the game ("Smart Tips") which was great - except for the fact that we told players what was happening after the fact that they had done it. When players were able to spawn in the tutorial match, and play through it entirely, the retention falloff was halved due to being able to play the game and see the systems that would help guide them in question.

Game tutorial 'fails' are when they are either wordy with images or text, or have you perform contextual actions that lack the context in which the action is useful.
Last edited by Secrets on Thu Jul 07, 2022 5:02 pm, edited 1 time in total.
Top
Post Reply
32 posts

Users browsing this forum: No registered users and 11 guests