Ask for in-game support. Bugs go to the Bug Tracker.

Forum rules
READ THE STICKIED THREADS BEFORE YOU POST IN THIS SUBFORUM.

The answers you may seek are likely already there.

A couple of guild tactics are missing from the available tactics in the guild UI, the icons under Purchased Guild Tactics. All available ones are purchased. 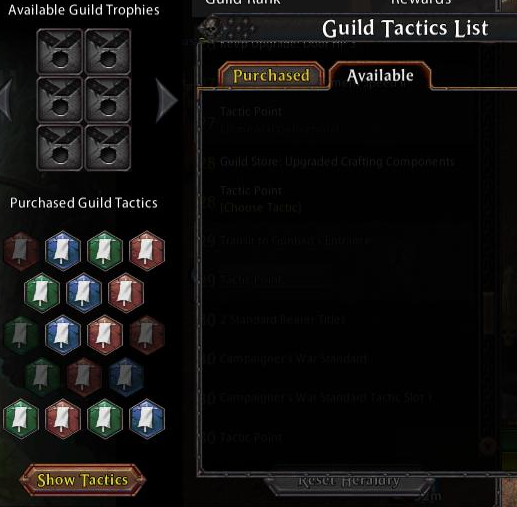 I've tried all manner of combinations of clicks and button presses to try to either equip tactics directly from the Guild Tactics List or change the icons under Purchased Guild Tactics. Maybe I'm missing something obvious.

The ones missing seems to depend on order purchased, i.e. the ones saved for last are missing. Respeccing doesn't seem to work either.
(It was hard to search for guild standards/tactics, with the search ignoring "guild", returning lots of unrelated posts. Maybe there's a good solution posted and I just can't find it.)
Top
Ads