I felt pretty hyped once new capitals came out. Good job (beside them being totally irrelevant for the core game), those are great places for sightseeing, exploring and finally something fresh for this dead game.
But i'd love to point out a minor issue - most of quests are absolutely non lowbie friendly. Its pretty ridiculous to force "questing" group up considering rewards are absolutely irrelevant for char progression and taking into account the need to kill heroes and do hard pq's would be definitely skipped cause it even makes zero sense to ask for a helping hand (cause again, rewards are off the progression curve).
Yet out of curiousity and working this week remotely I've done all but one KaK quests solo (obviously except 2 lords kills, gunbad and ch22) just for the sake of it.
And so here comes the funniest part - quest i yet struggle to finish is "That's Some Brouhaha" (order side). Im on part where i need to kill 50 destro in BFP EXACTLY inside Bugman BO and on top of that kills will only count for party (somewhat recent oRvR change) and only if order is defending BO and, again, kills count ONLY INSIDE the bloody damned tavern, so, if my pray manages to get out of door "whops, bad luck mate, see you on the other day". Suppose destro has the same issue, didnt check that myself.
Yes, i've got a huge butthurt

To me it's way beyond ridiculios to put such conditions for a single quest which will reward with x2 +19 talis (req level 16 tho) for bolstered twinks. Most of population on this server will need to spend like 30-60 minutes to get the whatever desired amount of +19 talis they would want for whatever char they wish in order to roam the lakes and clip some cool videos.
Not only one need to "catch" t3 zone but also meet such dire conditions.
I do appeal to sanity.
Please, either remove all the conditions or decrease the number of kill to 10 or 5 even. It's a quest.
As i see it, if content is created, efforts are put, job is done then result should be expressed in ppl occasionally doing those things out of boredomness for the sake of few coins or some other small benefits. At present all those efforts to set up most of quests are for absolutely nothing (ppl will be doing 2 pocket items tho if they wont be deleted once saga is over).
Last edited by nocturnalguest on Thu Oct 21, 2021 4:31 pm, edited 1 time in total.
Top
Ads

I stopped at the first sentence. No pictures. OP would you have your post in pop-up book format ?
Top

Just think, originally that quest and it's destro version required you to kill 50 greenskins/dwarfs and not just 50 enemies in general.
Zomega: RR8x Zealot

My bad folks, apologize
Here is at least a picture.

Omegus wrote: ↑
Thu Oct 21, 2021 3:08 pm
Just think, originally that quest and it's destro version required you to kill 50 greenskins/dwarfs and not just 50 enemies in general.

Well, thats pretty warhammerish tbf. Bitter path of endless pain and suffering with not a single glimpse of hope. I got it, i really do.
Point still stands tho - quests that reward you with something you can obtain in 30 minutes solo shouldnt be under such dire conditions, to complete it one may happen to be doing it for few months (you need to wipe 3+ warbands inside ~70-80ft area defending a BO in t3 zone, cmon). Else its canonical definition of lame design
Last edited by nocturnalguest on Thu Oct 21, 2021 6:16 pm, edited 1 time in total.
Top 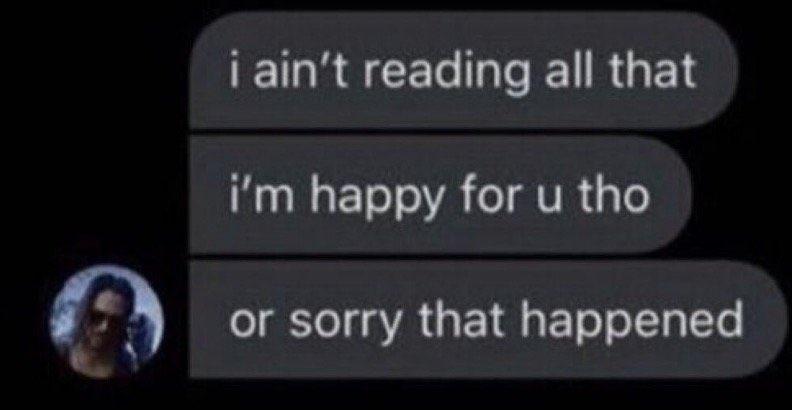 Yet another example of the people in charge just blowing off players without any interaction.

Yet another example of the people in charge just blowing off players without any interaction.

I wonder why so many people feel like they're considered a lesser class by the people running things around here?

Clearly we're not particularly affected by feedback like OP or yourself. Clutch the pearls a little harder. Think of the children.

The quest was designed to reward the player for participating in an epic battle over Ogrund's Tavern, which happens fairly often as that's one of the BO's in the game that people tend to flock to when it's open. 5 or 10 kills is not an epic battle, but I suppose he can be thankful it's not a timed quest and that you can slowly accrue kills over time.


Wait, wait, I got this: "Big city, lots of quest, stuck on one, everything sucks."

wargrimnir wrote: ↑
Thu Oct 21, 2021 10:48 pm
The quest was designed to reward the player for participating an an epic battle over Ogrund's Tavern, which happens fairly often as that's one of the BO's in the game that people tend to flock to when it's open.


This is true. And to illustrate that truth you can all see one such fight here, in this video:


Click here to watch on YouTube
Last edited by Martok on Fri Oct 22, 2021 2:14 am, edited 3 times in total.
Be who you are and say what you feel, because those who mind don't matter, and those who matter don't mind.
Top
Post Reply
14 posts