Dis truth. I guess all the bias in the world won't help us. Ever. 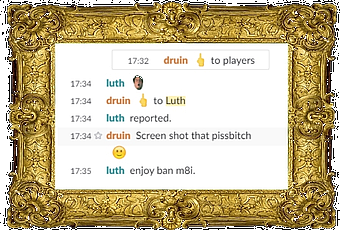 Pull working through vertical levels and gates and without immunities is silly and kind of game-breaking.
Sera
Top

t2 is not importance

but this time is importance

and core abilitiy not work is quyzbug

Genisaurus wrote:You are not entitled to Best-in-Slot gear just because you log on.

We're no strangers to love

You know the rules and so do I

A full commitment's what I'm thinking of

You wouldn't get this from

I just wanna tell you how I'm feeling

Never gonna give you up

Never gonna let you down

Never gonna run around and desert you

Genisaurus wrote:In any case, keep this inevitable-24-page-thread civil, and remember that we're not going to pay a bit of attention to this until T4.

Sera wrote:Pull working through vertical levels and gates and without immunities is silly and kind of game-breaking.

Pounce working vertically with no cooldown and with WL's burst is silly and kinda game breaking.

Sera wrote:Pull working through vertical levels and gates and without immunities is silly and kind of game-breaking.

Pounce working vertically with no cooldown and with WL's burst is silly and kinda game breaking.

I got no problems taking away vertical movement from Pounce... but why are you talking about it? Like Pounce and WL pulls groups through walls and doors? You make absolutely no sense.
Oh and if WL burst is a problem for you, that is a ltp issue.

Azarael wrote:It works, I've been on the end of it and I remember having to fix it when it was totally broken not long ago (Renork posted a report).


It doesn't work all the time though, I tested it with a friend and it's very random. Sometimes it works perfectly, sometimes it "fires" but the pet doesn't die, and the ability goes on cd, sometimes it kills the pet without knocking down people. At first I thought it was because I wasn't in combat, but that's not the case. It works perfectly 100% of the time in pve, so I dunno :> I guess it's a good thing with all the pulling going on.

deviating from the main topic.

Could it be because of range in pvp is a bit dodgy? You know, the whole "can't hit target eventhough standing on top of it"?
On another note, WE KD seems a bit dodgy as well, from time to time. Ppl moving while KD'ed, KD only lasting half a second etc etc.. But I've always blamed this on lag tbh...
Kenzing - Specialneedz
Top
Post Reply
37 posts