Shows notification window when you get effected by CrowdControll*
Sometimes it can be hard to see what kind of CC you been hit with or how long the duration is, This addon pops up a window displaying the kind of CC and duartion.

Update to ver 1.3 rewritten with a lot of added options 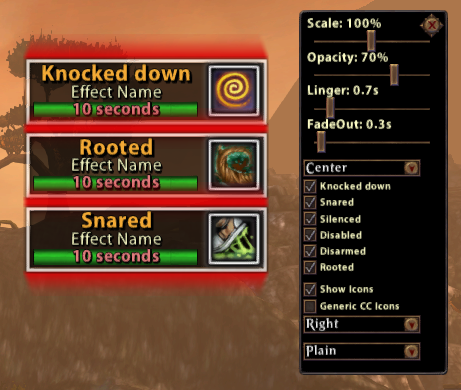 0.5:
- Incorperated all the ID's so now all CC's should show (Thanx Aza)
- Made the timer show decimals for better overview of the timer
- Smoother timer-bar as well
- Added Cooldown-wheel to the icon (the thing that rotates down to show cooldown on icons)
- Added Background Transperacy option from the CC meny
- Added Option to show actual effect icons instead of the basic CC-type icons
- The Snare % that shows should be more accurate now
- Should also be more accurate when acctually effected by CC's
- Should work on all Client languages
- The color of the iconwindow resemble what type the cc is (hex, ailment etc..) Threre are 2 kind of CC's: Action denial CC and Movement CC
The first window will show if you are hit by Action denial CC's
And these share the same Immunity timer, so you can only get effected by one at a time

Usage:
type /cctv to open up the CCTV editor mode where you can drag the window to a desired possition and change the scale of the windows
type /cctv again when done to close the editor mode *some CC's might not show, but that's because of lazy mythic that didn't put anny effect text on some of the ability De-buffs..

They call you the master of Addons for a reason
Top

Pretty much always afk or tabbed out.
Top

saupreusse wrote:They call you the master of Addons for a reason

Mostly since he's one of the few people left making new addons ^^
Massive kudos to the man with the plan: Sullemunk! <3

Sullemunk- the last of the mohicans.
Top

Thanks a bunch!
Top

Like thanks
Phantomdrake|Oz
*Do not send messages via forums as they are not checked/read. Contact in game or come into Discord to speak directly.*

Sounds like another great idea / addon from you, I'm going to use it asap.
CCM : Kolkuuth - Kolkutzz
CCM II : Kolkuth