Forum rules
Before posting on this forum, be sure to read the Terms of Use
Post Reply
133 posts

A addon that displays and announces your kills/deaths as alerts
(with that satisfying Ba-Dam-Bam sound), and keeping track of your Kill/death score

Now that T4 is upon us i decided to release Deathblow 2.0 for a fresh combat start

NOTE: This one will label itself DeathBlow2, so Delete or dissable your original Deathblow in the addon window (both in the interface and user folders, because it might be some backwards compatible issues).

Changes:
Player profiles are now stored globaly so it doesn't mather what profile or UI you are using. In short: one savefile to rule them all. Every player you kill or get killed by has their own Profile tab to keep track on moust combat stats.
Access it by clicking either a player in the Total/session tab or from the Chatlog A clickable and draggable button to show the Deathblow window 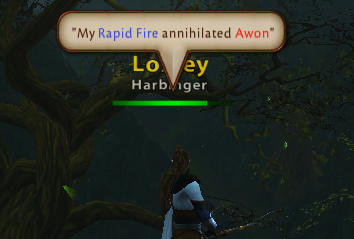 Nice addon, good work.
ps: do u or any know how to turn off quest don spam in middle of screen.
ps2: u rly want festering nerf do u?


Luuca wrote:... you forgot that in RoR, you must jump every seconds to exaggerate the Melee Distance Bug.

Small point: "Were" instead of "Where".
Top

Feedback and suggestions are much welcome

TenTonHammer wrote:ummm so whats the way to make it so that it dosnt "announce" your kills in /say