So... i deal zero dmg, their bars don't move, everyone just autoattack kills me, going solo for orvr is a suicide, white lion pet just looks at me and i'm dead,
everyone seems to be 40 and i'm farmed.

I feel like a fifth wheel for my teammates, trying my best, guarding healers, in t1 i was already rocking tables (coming from wow high ranking arenas, i love to compete)

What should i do? how can i improve with my gear now to stand a chance vs those players? 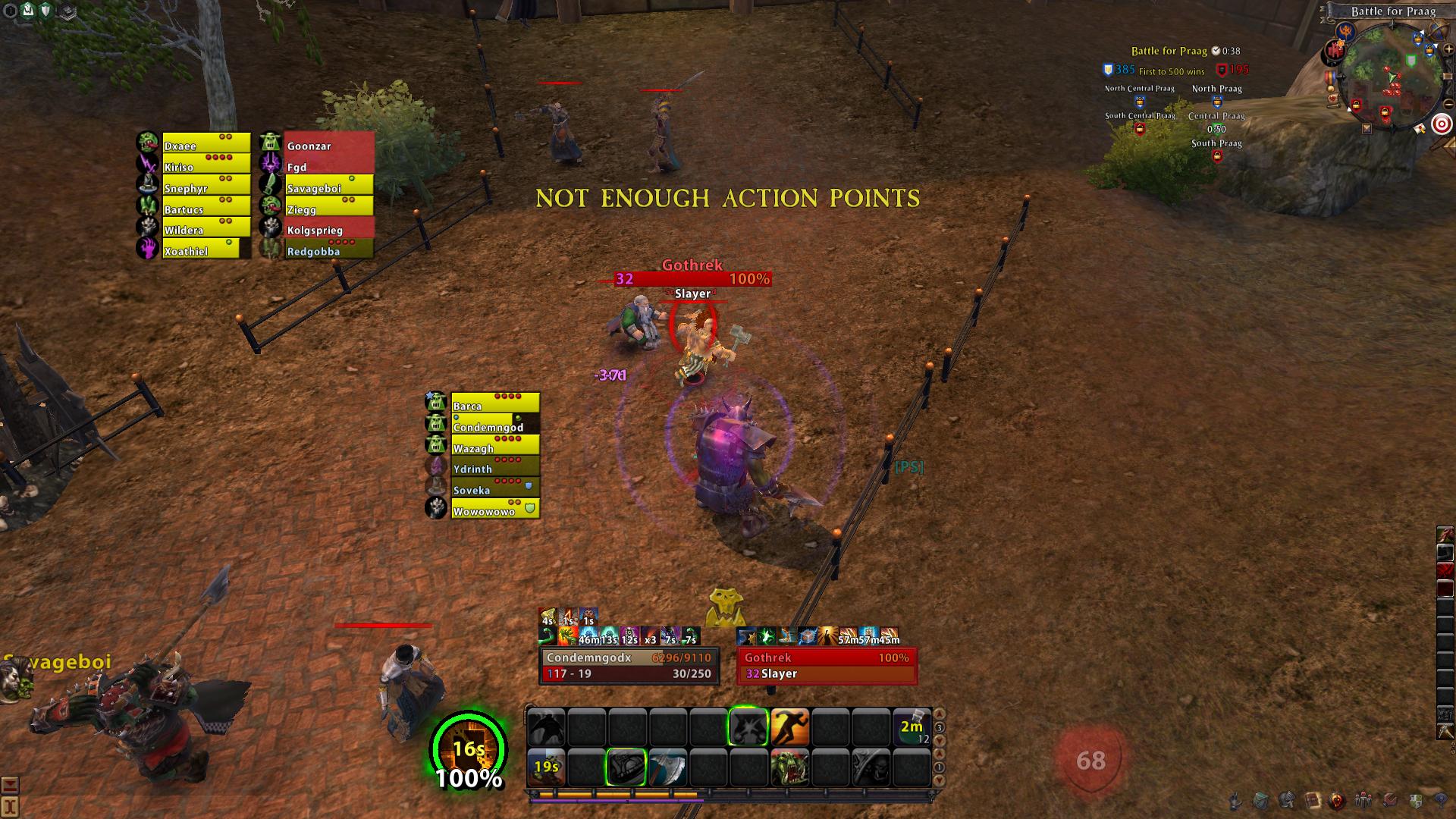 on a more serious note i give an advice (as how i leveled my alts without being the farm of enemy)
at level 16 FARM SCENARIOS: avoid rvr like brain cancer. You are useless anyway, especially as melee dps. You implode too fast, many level 40 are already high end geared. Farm scenario and climb up the ladder with SC tiers and weapons. Scenarios are 16/39 BUT unlike rvr appears to make a better job as bolster (many times i won sc with lotsa 16 against many 30+ pug vs pug) plus you get lot more exp which means level up faster. RVR give dogshit exp (yesterday i got 1.5k exp after locking zone (caledor) after playing and making bo/creates for 3 hours, to give you an idea.

Spoiler:
I feel like a fifth wheel for my teammates, trying my best, guarding healers, in t1 i was already rocking tables (coming from wow high ranking arenas, i love to compete)
as ex arena wow player in arena tournament, i can tell ya if you expect wow pvp better you quit the game. No arenas. just zerg vs zerg.

Spoiler:
What should i do? how can i improve with my gear now to stand a chance vs those players?
avoid rvr and farm scenarios while, for example, skilling up profession. Scenarios give buttload of exp if you win and gear difference is WAY less severe.

Once you hit level 35 (you can dress annihilator level gear) you CAN TRY rvr if you please, way better than do it at 16. Still you will be dogshit, especially considering choppa needs babysitting already with high end gear, imagine on low levels.

This! And only this!

Also it is utterly useless to push your rr far over your level. You will get stuck with crappy gear at lev 40 one way or another, because you did not get the tokens you ned before lev 40. Think my wh can jump directly from annihilator to invader. ~

Just have fun playing scenarios, where it is importent if you get lucky and have healers/tanks on your side and not if you have some epic shoulders.
Top
Ads

Drys wrote: ↑Thu Jun 17, 2021 4:40 pm I've suggested in the past (and will here again) that the Tier 2 single-keep zones could be reverted to 16-39 zones to make for an easier leveling and introduction to RVR for new people. Currently, not only do newer players need to contend with learning about keeps and siege mechanics, but they also need to go up against fully geared out 40/80s. The T3-T4 zones can remain available to R16-39, but a dedicated "learner" zone may be helpful. The T3 zones can open when the city is under siege as a place for 40s to go if they're not doing city.

The population to support this is just not there. It will be PvE door like in the past. Not to mention you are taking away 6 zones of the main campaign in favour of people who are levelling.

1. How critical to the capaign do you think those single-door zones really are? I'd say probably not much since the zerg blows through them and spends most of its time in T4.

2. I think the pop there is bigger than you think between newer players and alts. Otherwise why not get rid of T1 zones by the same argument... Even if it does become PvD it becomes a more friendly place to reach 39 for players, its a place for new players to learn keep mechanics, and players under 40 still have the option of joining the main campaign.

I see no real downside...

Been here for 6 years. T2 -T3 have never been able to hold up their belt. Too few players, even in EU. During NA times it is desterted.

Furthermore, you want a more friendly place; but new players won't stay new players for long. Levelling and introduction happens in T1, then you level to 40. Removing 2 full tiers to make life easyer for new players that will be 40 within 2/3 weeks is a ridicules notion.

What also happens when you have a bracket for R16-R39 to learn/level is that the bracket becomes full of twinked characters ruining it for others.
Zomega: RR8x Zealot

Omegus wrote: ↑Mon Jun 21, 2021 10:46 am What also happens when you have a bracket for R16-R39 to learn/level is that the bracket becomes full of twinked characters ruining it for others.