Forum rules
Before posting on this forum, be sure to read the Terms of Use
Post Reply
27 posts

It dawned on me that perhaps one of the reasons why people are not so inclined to take part in Scenarios is due to the map selection: one week you can have a moderately 'decent' rotation, while the other you find yourself with a whole bunch of maps that you do not enjoy one bit. While there is both a dedicated PUG Scenario and Premade Scenario, you have 5/6 other maps in the rotation, too, and so it makes sense that you should want to take part in a variety of maps, instead of solely queuing for one.


Though what Scenarios people enjoy is subjective - some people like Gates of Ekrund, others prefer Battle for Praag - I truly believe that there are some Scenarios that are universally regarded as 'the best' by the majority of people; maps that have a good combination of strategy and PvP, offering a healthy mix of both fights and objective-based gameplay. Looking at the current state of Scenarios, I feel that it would be a great idea to have at least one or two of these maps in the rotation, permanently, so that people are guaranteed to have at least one map that they'll probably like whenever they decide to queue.

The Community Managers made several polls a year ago, asking the community to vote on the maps that they least liked: 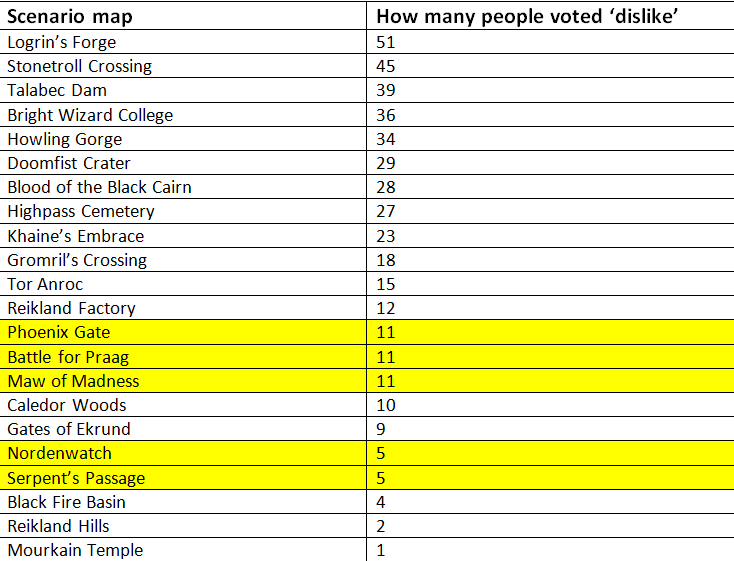 Note: I am not necessarily suggesting that permanent fixtures would have to be in line with the polls conducted by the Community Manangers; I am simply putting it here as a reference for people to gauge how some people in the community regarded certain maps at that period in time.

In addition to using the above as something to refer to, I would suggest that everyone who believes that certain Scenarios should be made permanent fixtures give some map suggestions below.

Thank you for listening.

Straight up thumbs up, it should've been done ages ago.
Gates of ekrund and nordenwatch as perma ones. 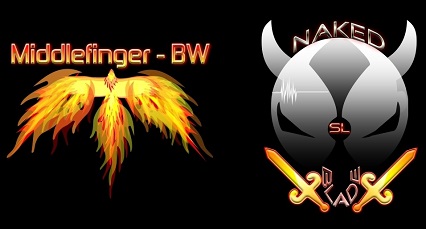 Yes I would like Nordanwatch, Reikland hills, and Serpents to be the perms.
Tourist SW 40/50+<Zaxxed> Discotec 40/40+<IRONIC>

A reasonable suggestion. Nordenwatch and Gates of Ekrund are good candidates for this

All of them have an option for some backdoor capture to get some points when teams are unbalanced, while not too distracting from the fight in balanced matches.


IMO there should be 1 melee-friendly (Gates, Mourkain), 1 ranged-friendly(mentioned above) and 1 more versatile one (Nordenwatch, maybe Battle for Praag)
Last edited by Grock on Mon Aug 12, 2019 6:02 pm, edited 1 time in total.
Orkni

I love this idea.

Unless Howling Gorge becomes one of the permanent sc's, in which case I despise it.
Tushi Psychotik Splatter Emoalbino Podge
Top

This definatly good idea. Having like top 5 best scenario maps fixed in rotation, like 2 from top 5 and rest random, which would include the top 5 maps.

It's really hilarious to see every time worst pve scenarios always being there in sc rotation. I dont even remember when NW was last time in rotation.

I would definitely be in favour of seeing Gates of Ekrund, Nordenwatch and / or Black Fire Basin as permanent fixtures for the scenario list.
Top

Would be nice to see more 5-Flag Scenarios for 18 people per pairing. those will make queue times smaller and many people can join them.