Forum rules
Before posting on this forum, be sure to read the Terms of Use
Post Reply
31 posts

Hmm this is a lot to digest.

Giving Choppa a conceptually broken ability, which effectively removes multiple defensive statss from the game isn't really a good idea i'd say.(neither was giving it to the Slayer /shrug)

As far as giving the CD reducer to the WE i'd say it's a well intended change, which could work to a degree like the broad severing did before it was fixed regardless of the state being intended it woked to a point, however it doesn't really address their big fundamental problems really, where their percieved identity conflicts with the overall game direction.
Top
Ads

Stop this choppa hate. Just because you get pulled when you run away like chicken from a fox.

Imagine Choppa gets nerfed and Destro starts playing Magus bombing and rift.
Wanna see how much you going to cry and elaborate nonsense balance topics.
Top

Imagine Choppa gets nerfed and Destro starts playing Magus bombing and rift.
Wanna see how much you going to cry and elaborate nonsense balance topics.

I don't see any Choppa hate here.
This thread is about "Chop Fasta!" not "Git to da Choppa", and moving this utility to WH/WE, while compensating it with MORE damage.
Anathae [KotBS] / Anathea [WP] ( and couple others )
former Anathae [Zealot]
Top 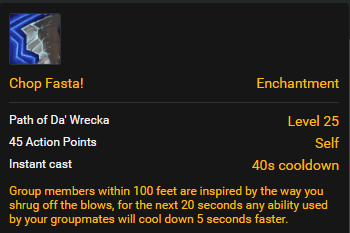 I like this a lot, it's simple, it's effective and, it's balanced. It gives a purpose to WH/WE in wbs, it balances the Choppa better to be a mirror to the slayer, and it fixes on of the issues in overall balance (destro having 2 group CD reducers compared to orders 1).

I think Rampage mirror is the easiest way. Then the major difference between Choppa/Slayer is GTTC vs ID, which has it's pros and cons as it should be.

Yeah, might as well Give Choppa stealth also, also increase it to heavy armour
Top

That sounds fair to me

As a main Choppa for 4 years straight and playing Chosen now..thumbs up for the idea.
Silently we bide our time
Soon we'll pay you back
For all the wrongs you've done our kind
For the stabwounds in our backs
Top

Destro has been getting a steady flow of nerfs lately, classes are constantly being tweaked. I read through all of this and it's not a horrible idea but I also don't think it'll ever happen. Slayers have their advantages and choppas have their own. Also trust me it's not like this hasn't been discussed before.
gorbane - choppa
Top
Ads

Why should Choppa get a Slayer kill and Slayer not get one in return ? Wasnt shatter limbs enough ? we didnt get any back from giving that to SH.
Ravezaar Slayer rr83
Ravez Ironbreker rr81
Goingsolo Shadow Warrior rr80
Top

ravezaar wrote: ↑
Sun Aug 23, 2020 8:22 am
Why should Choppa get a Slayer kill and Slayer not get one in return ? Wasnt shatter limbs enough ? we didnt get any back from giving that to SH.

Because this thread is about elevating two bottom tier dps classes, with a major utility skill from choppas so they are gonna need something major, in return. (Assuming it happens)
Top
Post Reply
31 posts

Users browsing this forum: No registered users and 14 guests