Forum rules
Before posting on this forum, be sure to read the Terms of Use
Post Reply
73 posts

Disclaimer one : English isn’t my native language.
Disclaimer two : If you are not interested in maths, read only italic bold.
Disclaimer three : I did NOT play Black Guard to 80, if i’m off with something just point it out.

Time is a problem for IBs, more so than any other tank in the game, and that’s why they underperform severely. Does that mean they are terrible ? All tanks are good since guard is a super strong mechanic, so no, IBs are not terrible. Would you do better playing any other tank ? Most certainly yes. And this is why :

Whatever tank you are playing, you have to do some basic tasks, and i’m only talking about the very basics here :

Then, in order to maintain all your buffs on yourself plus one ally (obviously even worse if you wanna buff several allies), you have to spend 6.325sec casting every 10sec, in a perfect situation with no lag, no enemy disabling you and with the help of nerfed buttons.
This will never happen, but let’s say you are the absolute god of positioning, with the best “brain to hand connection”, defend each and every disabling effect, and play sitting on the server.
You will still spend 63.25% of your time casting buffs : 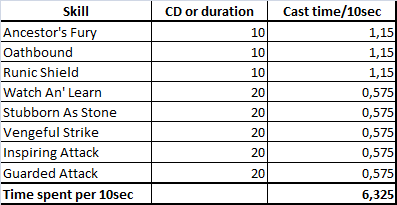 Your time resource does not allow for any other ability cast. So, no snare, no armor debuff, no KD, no punt, no crit debuff, no hold the line...(and only one outgoing heal debuff in that case)

This is not realistic at all, so let’s say you only use the buffs your buddy slayer wants, and the reason he invited you in the warband in the first place :

Not so bad heh ? Only 40.25% of your time resource used here.
Add the 30.67% from the very basics and your are at 70.92%. Since one skill is 11.50% you are allowed to use TWO whole skills (no hold the line of course) before running out of time.
Keep in mind that if you want Watch An’ Learn to give AP, you have to hit people, so better use abilities with a damage component and not raising your arms in the air buffing.

And when BG uses a skill, he often gets more return on his time spent than IB. Punt ? Longer punt. KD ? Longer KD (if snb, and please, don’t argue about conditions, if you are guarding someone, you will block something, if you weren’t thinking that, you wouldn’t use a shield in the first place). Damage skill ? Many aoes compared to single target means more damage. Also, his absorb shield buff that i included in both rotations (IBs and BGs) works versus physical and magical damage, IB one is only magical.

Yes, in some cases, IBs got stronger skills, but they would need to be twice as strong as BGs ones to compensate for the fact that IBs only cast two of them to the four of BGs. And it’s definitely not the case.

So yes, when you read IB skill set, you think they have everything, that’s amazing. In reality, they don’t because they don’t have the possibility to use skills without forgoing their buffs. Meanwhile, KotBS and SM are buffing passively (or almost passively) and have time to perform other tasks like crowd control or even holding the line !

Buff the Ancestor’s Fury and Oathbound duration to 20sec.
Buff Runic Shield value and duration by 20%.

This would allow IBs to use one more skill per 10sec period, which is my primary concern here, remember, BGs can still use four (so 33% more skills than IBs, right now they can use 100% more which seems far over the top).
And give a boost to Runic Shield which is a very underperforming absorb mechanic compared to other tanks “bubbles”.

Ok, first of all. You did an amazing job. Second point is: Devs hates the "this class has this things so I want something too". Third, skip the BG part (see previous point) and post this **** in the balance forum as fast as you can!
NOCTURNE
Zputakatarro-Choppa rr83
Zputadenti-Shaman rr77
Ysaran-Blackguard rr60

and then WP, AM, IB, Slayer and SH
Top

Removed most of BG stuff, kept the stuff that makes any kind of comparison possible : they r free to cast twice as many skills in the same time period.
Top

I agree with you and i congratulate you for your math. Indeed I too felt the issue of time as an IB. If you are set on using as many buffs as you can you are severely limited in what skills you can use before you have to start the rotation again to apply buffs.

I also wholeheartedly agree with Ysaran. Take his advice and redo the presentation a bit before pushing it further.

3/4 of your buffs you dont need to use, becouse of pots, auras, RP buffs, etc

You say that like it's not an issue. IB needs love. Make rising anger passive. IB the only tank that doesnt get all his eggs in one basket unless you gimp yourself via tri spec as it is!
Top

The grudge should stack while hitting without a tactic to do so.

The punt is quite ridiculous for its cost, 25 grudge is a lot, beginning of fights are key for making pressure and IB have a huge disavantage compare to Kotbs/chosen/ BG.
Getting punted right at the begening while you have no chance no punt first because you need 25 grudge sucks, if only IB had super punt like Bg would be ok because the disavantage at the begning is then counter-balanced but its not the case. Punting is lowering grealty IB's damage by its cost, also it can be parried which is 25 grudge vanished in the air and the punt is not so great.

As Foltestik said, armor buff is kinda useless because everyone is running armor pots (and yes you can get spirit pots and buff armor , but then AM buff is useless etc etc). This buff should stack with pots with maybe lower value like 500.

Toughness buff, cost grudge, applies on only 2 ppl (because good luck switching oathfriend to buff all you team) is lower than Kotbs' one which is passive and groupwise...no comment.

Ancestor'sFury strengh buff is useless because you have more with inspiring attack, also neither of those buffs stack with strengh pots. I am not saying Ancesrtor's fury is not good, the 10% crit is still great.

Don't forget that Watch'n'Learn cooldown is 20s but it's uptime is only 10s, makes the situation even worse, you can do 2 autoattack hits in that time period with a 2h, pretty weak compared to anything else. The duration of most IB skills needs to be increased/doubled to make them really count.

Another thing, which IB suffers a lot from, is it's class mechanic resource, grudge, that defines the amount of damage you do. For BG, hate does not matter for damage values, it's only the IB that suffers with this. There will be another post coming about how grudge mechanic affects (spoiler: ruins) the IB's damage in the long run.
Gryyw - Ironbreaker
Top

Well I won't imagine it will get the devs to change anything, but this does a good job of showing how hellish having a lot of buffs up is.

Most IB abilities are pointless compared to Knight, Potions, Liniment, healer buffs, but something better than 10 seconds on most Crit Buff and Parry would be nice as those are the two things that IBs are objectively taken for, I mean Knight gets 100% uptime on his best stuff and no class mechanic to manage, come on.
Brynnoth Goldenbeard (40/75) (IB) -- Rundin Fireheart (40/50) (RP) -- Ungrinn (40/40) (Engi)-- Bramm Bloodaxe (40/83) (Slayer) and a few Empire characters here or there, maybe even an elf.
Top
Post Reply
73 posts