Forum rules
Before posting on this forum, be sure to read the Terms of Use
Post Reply
111 posts 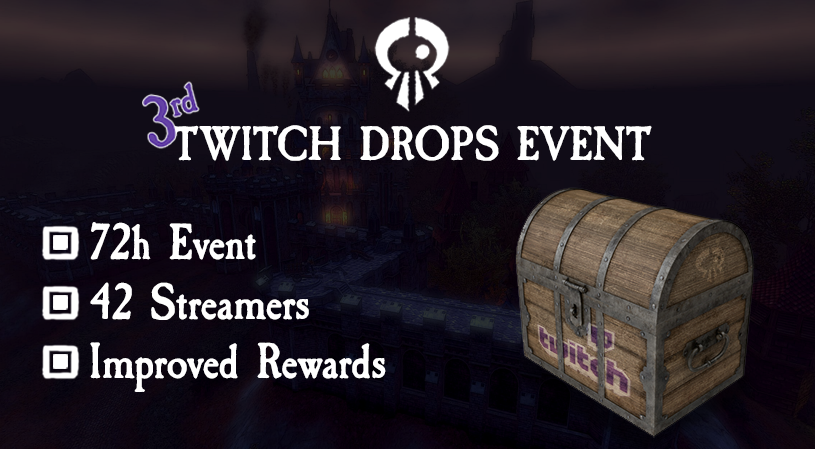 The 3rd Twitch Drops event is now live! Tune in to your favorite streamers, watch them long enough and claim tens of rewards worth hundreds of gold!

Rewards must be claimed within 7 days. Twitch Drops quests have a deadline of 7 days.

[Weekend Warfront: The Siege of Praag]

These are dark times for the city of Praag. The Raven Host have summoned a daemon and are planning on feeding the innocent souls of the townsfolk to the foul beast! For generations, the sons and daughters of Kislev have fought and died to protect their lands from Chaos invasions. Can they hold Praag once again?

This weekend the Battle for Praag will be the weekend warfront from 12:00 on Friday to 12:00 on Monday Altdorf time. You get +50% XP and Renown in this scenario, and extra rewards from completing the event tasks.

- The drop rates for Invader Medallion Shards and Royal Crest Shards has been increased.

- After a fort has been locked for 8 hours, the pairing will reset back to the middle, unless a city siege is in progress. Currently the timer is not shown on the map, only as a PQ reset timer if you enter the fort. We will try to add it to the map as well in the future.

- The value per supply resource for ranking up keeps is decreased a bit.

- Some tweaks in how contribution is measured.

- Scaled down all the personal loot roll numbers so a gold bag is won with a total of 1000+. The chances for each bag type and the proportion of roll vs contribution remains the same as before.

- The cannons in Battle for Praag are removed.

- The pet damage reduction based on range from owner now only applies to melee pets.

- Git To Da Choppa: Fixed a few issues with this ability, the range is now slightly bigger, matching the tooltip. It is now defendable. Interrupting it will no longer cause an extra damage tick.

- Snipe: Corrected the weapon DPS contribution so damage matches tooltip (Note that weapon DPS from ranged slot is only updated on the tooltips if you relog).

- Thunderous Blow: Back to 5s cooldown, but unaffected by cooldown reducing abilities. The maximum wounds debuff at lvl 40 is adjusted to 120 wounds. Tooltip is updated to match.

- Incognito: The 30s duration is removed. However, you will still run exit stealth if you run out of AP. Which means that the longest you can normally stay in stealth is 1 minute and 23 seconds. But the longer you stay in stealth the less AP you will have left when you leave stealth. Note: To Glory! will no longer affect you in stealth.

- New Ability at lvl 34: "Purgatory", 2s cast, 20s cooldown: By driving a stake through their heart, you condemn your enemy to Purgatory. They cannot be resurrected for the next 30 seconds.

- Shadow Prowler: The 30s duration is removed. However, you will still run exit stealth if you run out of AP. Which means that the longest you can normally stay in stealth is 1 minute and 23 seconds. But the longer you stay in stealth the less AP you will have left when you leave stealth. Note: Dreadful Terror will no longer affect you in stealth.

- New Ability at lvl 34: "Shadow of Death", 2s cast, 20s cooldown: With swift motion of your daggers you carve the hand of Khaine into the flesh of your victim. They cannot be resurrected for the next 30 seconds.

- Summon War Lion: Stat contribution from wounds on items was set too high and is now fixed to match tooltips.

- Blood Ward of the Subjugator was missing from RvR bags, it can now drop properly again.

- The Talabec Dam: This Ranked sc quest can now be turned in at Riccekac Warshard

[17825] crit talismans now stack aswell.
[17823] you can no longer jump from unreachable pve spot directly to keep postern area.
[17853] Liniment of Unfeathered Zeal is now in same cooldown group as other liniments.
[17810] The Water Pumps can now be clicked during the second stage of the PQ
[17738] The quest can now be turned in to Kaige Mortem
[17830] The Giant Bat Deathwing will now longer roam outside of its cave
[17769] You can no longer war report within same fortress.
[17821] Sniper's Shoota Of Anathema fixed.
[17854] Black Orc M4 "Yer nothin" fixed.
Top
Ads

Removed cd for stealth. But when stealth detection get buff? I cant detect stealth when stay right on player. This called invisibility, not a stealth.
Last edited by hriam123 on Fri Oct 02, 2020 10:35 am, edited 1 time in total.
Top

I think it's really good that the developers give the stealthers some love. It is indeed also overdue. I am happy for both sides

Also the fact that the tokens drop more often is great, I personally am no friend of the cities and prefer Open-PVP.
So I would be really excited about a "total weekly reward" which could be completed by a summery of scenarios, open-pvp, castles, forts etc.

Good thing guys, keep it up!
Like it Hard (Drakenwald)
...PVP, nothing else...
Top

hriam123 wrote: ↑Fri Oct 02, 2020 10:29 am Removed cd for stealth. But when stealth detection get buff? I cant detect stealth when stay right on player. This called invisibility, not a stealth.

Somehow around 400 init +, I start to detect WHs around me, dunno if it has an increase range with more INIT or something.
Top
Ads

will the healer get a message stating how long the target isn't able to be resurrected yet ?
will the affected characted receive a message when the spell fades ?
Last edited by zak68 on Fri Oct 02, 2020 10:45 am, edited 2 times in total.
Top
Post Reply
111 posts