Forum rules
Before posting on this forum, be sure to read the Terms of Use
Post Reply
204 posts 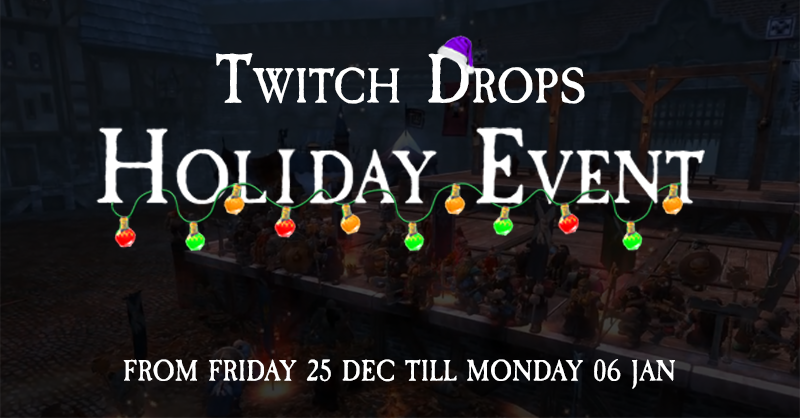 What are the rewards?

You can check the detailed list of rewards here.
You have 7 days to claim the drops using your account's page, and 24 hours to open the green, blue and gold presents in-game.

From Friday 25 December noon till Wednesday 06 January noon (Altdorf time), you will be able to claim daily valuable rewards.

The wheel of the seasons has turned, ushering out the sun’s last warmth with bitter blasts of northern winds. As snow creeps down to block mountain passes and lock the Warhammer world in the icy talons of winter, the citizens of the Old World raise their mugs high; the time of Keg End is at hand. In an epic celebration fraught with boasting, toasting, and epic fireworks, the Dwarfs clear out their stores of ales, beers and other intoxicating beverages in order to bring luck in the New Year and make way for a stock of better, stronger brews.

The Holidays are upon us and, as such, Keg End returns to WAR! Welcome to a Live Event full of toasting, boasting and killing lots and lots of things.

- Ranked solo now gives emblems and the same amount of weekly tokens during off season.

- Locked flag status is also shown on in the objective tracker window.

- Golden Stein buff is no longer removed when entering scenarios.

- Run Away (Goblin tactic): this tactic will now trigger at most once every 10s.

- Resurrection buffs are now properly cleared when declining the offer.

- Rune of Burning : The tooltip of this ability wont update with weapon dps anymore.

- Run Away! : This ability won't fire if you don't have an active pet.

- Red tipped Arrer: The regular damage component is now applied before the absorbs are removed instead of after, like it says on the tooltip.

- Kaboom! : This ability has been renamed Lemme Out! and now share CD with Squig Armor.

- Squig Leap : The range of this ability is reduced to 45 ft. This ability will deal damage when you land once again, but cannot critically hit.

- Da Waaagh Iz Strong: The retrigger interval of this tactic is changed from 1 second to 3 seconds.

- Echoing Roar : This ability can be purchased at 5 step in Hunter Tree

- Pounce : This ability can be purchased at 5 step in Guardian Tree and the range is reduced to 45 ft. This ability will deal damage when you land once again, but cannot critically hit.

- Burn Armor : The effect of this ability has changed and will now reduce the armor of all enemies 40ft in front of you.

- Wings of Heaven : This morale is now a morale Level 1 and the range is reduced to 65ft.

- Swift Strikes : This is now a core Path of Assault ability available at lvl 21.

- Shadowstep : This ability is now available at 5 steps in Path of Assault, the range is reduced to 45ft and the defense buff is reduced to 15%.

- Whirling Rage : This morale is back at 15 step into Assault Tree.

- Treacherous Assault : A 30ft pounce component has been added to this ability.

- The towers at the Ruins of Greystone Keep and Kinschels's Stronhold BOs are classed as illegal areas, meaning that you will get the overextension debuff if you stand on top of them.

- Raising Da Banner: You will now have to collect the bones and the dwarf heads

- A Quick Bite: This quest is now available from the Half-Submerged Egg in Barak Varr

- Orcy Vandalism: This quest has been corrected

- Dueling Orcs: This quest line has been corrected

- Groundin' Da Fliers: You will now have to kill Thardrik Pilots and Thardrik Ground Crews to collect their heads

- Into the Badlands: You will now have to show Brother Matthias' Head as a proof you killed him to Trug

[17561] DoTs no longer show a final tick in combat log after the target has died.
[14210] The Piles O' Bones now correctly drop the different bones
[14627] The different dwarf supplies can now be destroyed
[14211] The quest marker now displays both objectives, and there is now an order to complete objectives
Top
Ads

W/E get pounce? W/H aoe armor debuff? be interessting to see how it works out.
-= Agony =-
Top

Yeah that was unexpected! Will be interesting to test out for sure! I like that they try to experiment with those 2 classes though, see if they can be improved somehow and find a nice niche.
Top

Looking good all around!

Swift strikes is garbage, so moving it core makes no difference whatsoever. Can see why you did it, to get shadowstep to where pounces are on other classes, but no-one cares.

"the range is reduced to 45ft and the defense buff is reduced to 15%." baffled. Completely baffled. Shadowstep puts you where your target WAS not IS when you land, so it's already a poor gap closer, now it's just much much worse than pounce/leap which can now dismount again, which SW can't do.

Why not just remove assault and come out and say "SW is a ranged ONLY class" cause you're getting there slowly.
Top
Ads

Why moving WL skills between trees? I get you u are making hunter more aoe oriented, but it messes with builds. for aoe build you will not be able to have finisher+pounce, because echoing roar is a joke ability and no one took it. and for ranked you want have heal debuff+pounce together. like, why messing with class that much? WL is already nerfed to a great extent.
Top
Post Reply
204 posts

Users browsing this forum: No registered users and 14 guests