Forum rules
Before posting on this forum, be sure to read the Terms of Use
Post Reply
24 posts

* Now rewards Invader Medallions for stage 1 and 3 wins. (Temporary for testing)
* Fixed an issue where leaving or crashing a city siege would not put you back into the city queue upon re-entry to the game.
* Fixed an issue where a warlord dies while capturing an objective in stage 2.
* City Siege re-attempt time increased to 12 hours.

* Fixed an issue which caused Stage 3 not to start and let people out of the barrier.
* If an instance is won it will be announced globally.
* The kings now do unique speeches at every stage
* Announcements should now be more noticable
* When Lobba Gits/Cannoneers are spawned it will be announced.
* When Lord of Change/Sun Dragon is attacking the Door it will be announced
* Sun Dragon/Lord of Change now only require 3 seconds per person to summon down from 15.
* The Palace Door will now announce every 30 seconds its health percentage if it is under attack.
* Fix for Stage 1 where the Cannons/Catapults/Sun Dragon/Lord of Change wouldn't attack the door.
* People can now access their city through the portal whilst it is recovering.

- Fixed an issue with partyframes getting stuck at distant and not updating that properly.
- You should now be able to see group members on the map in different zones.

* Thank you for those whom have queued for the ranked system thus far. We have made the adjustments above due to your feedback in public and private channels. We will be working on the Ranked Rewards system soon - which will include two armor sets and weapons on par with Darkpromise gear. Stay tuned.

- Dwarf and Greenskin fortress lord mechanics have been redone.
- Fixed missing aggro mechanics on some lords.
- attempted to fix issue where players are not added internally to the fort in the right way.
- increased SOR timer from stage 1 to 2 to match ingame better.
- fixed an issue where the second lock of a fort for the same realm would not make bags be generated.
- domination check improved.

- Keep lords should not engage players who accidentally AOE him before inner is down. Though someone going too close will still be engaged.

- Quest Givers and basic gear merchants for each chapter are separate NPCs now.

- Dwarf and Greenskin fortress lord mechanics have been redone.
(...)

Something could detail the current avoidance / strikethrough mechanic ?

Since the last patch I'm not able to login anymore, because of a corrupted file.
I have tried to delete interface.myp, without success, exactly the same message during the download.
Any help is welcome. 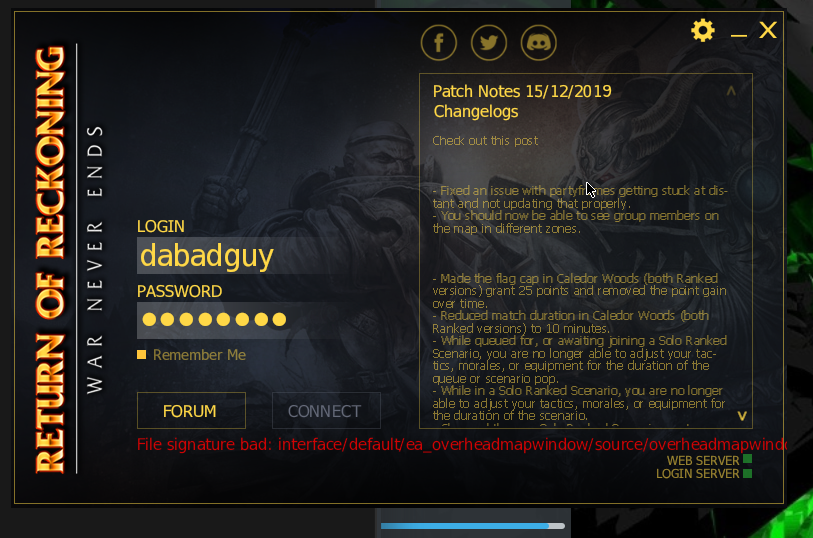 Not being able to change morales/tactics/equipment/respec in solo ranked is a terrible change. You need to adjust your equipment/tactics and morales depending on who your enemies are and your allies. You don't want double demo on tanks; you could have more defensive/offensive gear on dps, armor/wp gear sets for healers, etc etc.
<Montague><Capulet>
Top
Ads

I'm having the same experience as @sancra (can't log in due to bad file signature).

Okay, fixed for me by (since I'm under linux) running WINE in debug mode.
Last edited by zachary on Sun Dec 15, 2019 9:10 pm, edited 1 time in total.
Xand*r*nius is still trying to Learn To Play
Top
Post Reply
24 posts